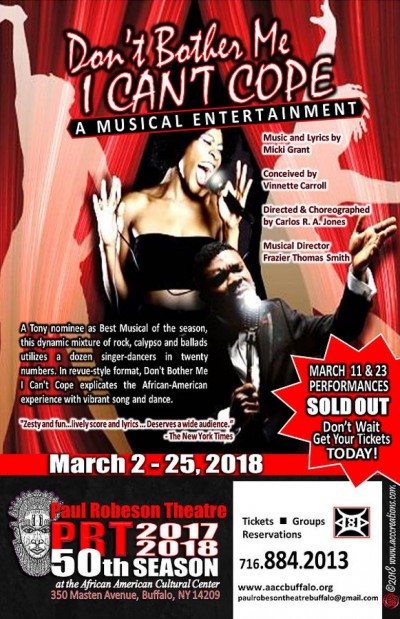 A Tony nominee as Best Musical of the season, this dynamic mixture of rock, calypso and ballads utilizes a dozen singer-dancers in twenty numbers. In revue-style format, Don't Bother Me...explicates the African-American experience with vibrant song and dance.

Written By Micki Grant and Conceived By Vinnette Caroll

The Paul Robeson Theatre is the oldest African American theater in Western New York , founded in 1968 to nurture and showcase the artistic talents of African American playwrights, producers, directors, actors and stage technicians.  In addition to a stage component, the PRT consists of the Paul Robeson Adult and Children's Drama Workshop, and the Paul Robeson Technical Theatre Workshop. The 130-seat theater is housed in the African American Cultural Center ; and the season runs from September to May with an average of four productions. Subscriptions and group rates are available.