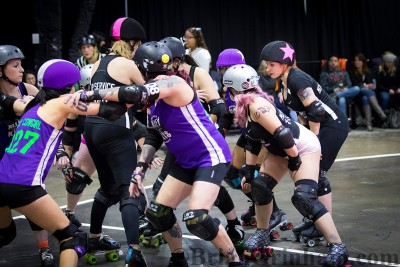 Buffalo’s Queen City Roller Girls are well into their 12th season and tickets are on sale now for the fourth home game of the 2018 season.  Join the Alley Kats and Devil Dollies as they recreate the season opener on Saturday, February 24, 2018 at 7 p.m.  In the first game featuring these two teams, the Alley Kats defended their 2017 cup and dominated Devil Dollies with a score of 290 Kats-164 Dollies.  Coming into this game, each team is at one win and one loss for the season, and both teams have something to prove!

Season and individual game tickets can be purchased at http://www.qcrg.net/tickets/.

The 2018 season for the home teams is now about halfway through, which makes this game even more climactic.  Each of the three home teams have one win and one loss this season.  The next few games are crucial in deciding who will secure a spot in the Championship game on June 1st.  This game will prove to be one of the fiercest this season!

Looking for more information about roller derby?  QCRG is active on Facebook and Twitter! You can also read more about the league at qcrg.net.  Roller Derby is a competitive, fast-paced, family-friendly sport that is quickly becoming part of Buffalo’s identity.  Make sure to come out for a game for the 2018 season!

Queen City Roller Girls is a roller derby league based in Buffalo, with three local teams, two travel teams, and a junior league for girls ages 10-17. QCRG has over 120 skaters, referees, coaches, and volunteers.