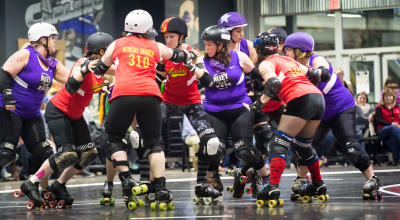 The next Queen City Roller Girls bout is coming up on Saturday February 10th at 7PM featuring the Alley Kats and Suicidal Saucies. These teams battled it out in a close scrimmage in December, and will face off for the first time officially in the 2018 season. The Kats (2017 Champions) look to avenge their only 2017 loss against the Suicidal Saucies.

Combining a mix of new and old skill, both teams boast rosters of rookies and veterans alike, including players that double as QCRG travel team members.

Tickets can be purchased at the door or in advance at www.qcrg.net/tickets. General admission is $15, and upgraded premium view tickets are $20. So grab your family and friends and head out to Buffalo Riverworks on February 10 to see the action.

The Queen City Roller Girls (QCRG) have had their home in WNY for eleven years and are entering their 12th season. 2018 will be their fourth season at Buffalo Riverworks.  QCRG has five teams:  the internationally ranked (18th) Lake Effect Furies, the B-level travel team Subzero Sirens and three home teams: the Alley Kats, the Devil Dollies, and the Suicidal Saucies, with over 70 skaters ranging in ages from 18 to 50.  QCRG is an all-volunteer run organization supporting WNY charities at every game.

QCRG is a member of the Women’s Flat Track Derby Association (WFTDA) which has over 1,000 member leagues on every continent in the world. Roller derby is one of the fastest growing sports in the world as well as one of two full contact sports for women (the other one is rugby).