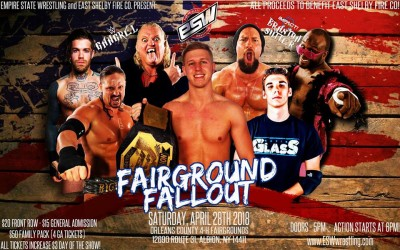 Gangrel is best known for his tenure in World Wrestling Entertainment, which included being the leader of “The Brood” faction that also consisted of Edge and Christian. The trio were  temporarily part of The Undertaker’s “Ministry of Darkness” group. He partnered with Matt and Jeff Hardy to form “The New Brood”, as well.

Sutter’s appearance at “Fairground Fallout” comes of the heels of nearly capturing the ESW Heavyweight Championship from Kevin Bennett. After the match, a very frustrated Sutter shockingly took his frustrations out physically on Bennett and threw a table and chair at ringside. Sutter is set to face Rochester, N.Y.’s “Captain” Nick Ando.

Delaney has made numerous apperances with ESW over the last few years. At ESW’s last event, him and his partner Cheech challenged for the ESW Tag Team Champions against the reigning champions Oliver Street Express and The Fraternity in a triple threat match. Delaney will face ESW stalwart Brandon Thurston at the Albion event.

Some of Western New York’s best independent wrestling talent will be showcased at the event. Fan favorite Frankie Feathers will battle against former Ring of Honor (ROH) star Cloudy. Ex-ESW Heavyweight Champion Bill Collier, Albion native Kevin Blackwood is scheduled to wrestle as well as Medina, N.Y.’s Gavin Glass will  be in action.

“Fairground Fallout” is being present in conjunction with the East Shelby Fire Company. Proceeds from the event will go toward the fire department.