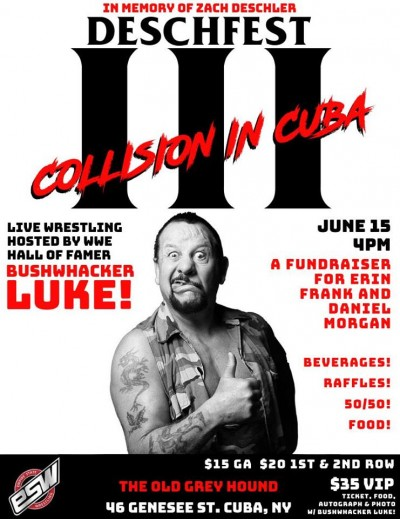 Details for "Deschfest III: Collision in Cuba" include:

*A special appearance by World Wrestling Entertainment Hall of Famer Bushwacker Luke
*Live wrestling action featuring the heroes and villains of ESW such as upstart tag team The Universal Era and the debut of Canadian wrestler Rex Atkins
*Beverages, raffles, 50/50 and food sales will raise funds for Erin Frank and Daniel Morgan
*VIP ticket packages include an event ticket, food and an autograph and photo with Bushwacker Luke
*The event will be held during Cuba's Dairy Days which includes a local festival and parade - making this event part of a great family weekend getaway
*Live music will be played by classic rock band Stoneclad after the wresting portion of the show from 7 p.m. to 11 p.m., with the entire event held in memory of Cuba native Zach Deschler