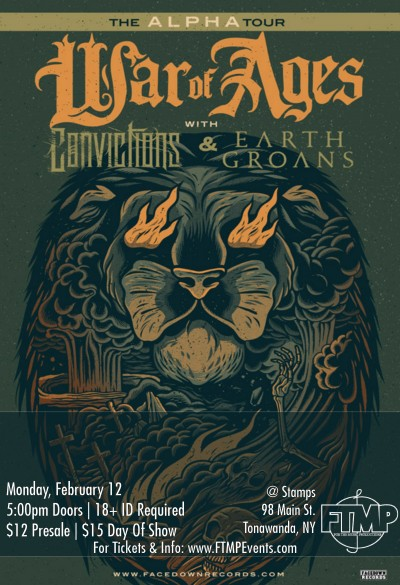 War of Ages has a long standing tradition of delivering relatable metal music for fans of all ages. They’ve been releasing heavy music with raw power since the band’s conception. Their impressive discography includes six studio albums equating to over 100,000 album sales with the 3 latest albums hitting the top 200 billboards. War of ages has toured extensively with bands such as As I Lay Dying, Soilwork, Throwdown, Demon Hunter, Underoath, Unearth, Between The Buried And Me, and many more.

Leroy Hamp and Steve Brown began War of Ages in 2003, adding drummer Alex Hamp soon after. They have continued to be the backbone of War of Ages for the past 10 plus years. Since then the band has toured rigorously all over the world and stayed consistently busy. After adding guitarist Jack Daniels (Hope for the Dying) into the mix in 2013, the band re-emerged with a vengeance and an improved writing style.

War of Ages has developed a huge appreciation and sense of humility for the career they are blessed to have. Whether playing for a crowd of ten thousand or a crowd of one hundred, they deliver the same solid show with the same high energy. They strive to maintain their sense of real-ness with their fans while at the same time providing for and being a role model for their families. With future albums, fans can expect more creative growth and hard hitting music. A forced to be reckoned with, War of Ages expects to remain a solid fixture in the metal music spotlight.

Hailing from Fremont, OH, the five piece Christian metalcore act known as Convictions is starting to make an impact on the world. Dubbing themselves “Aggressive Worship,” the band is not your everyday Christian band. Setting out to write lyrical content based on their own “convictions,” the band covers topics that push the boundaries.

“We feel that, just because you are a Christian, doesn’t mean you are exempt from the struggles of this world.” With an infectious live show, one can never predict what will happen when seeing the band live. On stage and off, Convictions never fails to draw you in and capture your emotions.

"Chaos was the law of nature; Order was the dream of man." - Henry Adams, Listening to Earth Groans, their music speaks of exactly that. Pulling inspirations from hardcore, metal, odd time and death-core inspirations, Earth Groans creates an experience of organized dissonance and very aggressive vocals. "No one whispers about something they are passionate about" (Jeremy front man states) "Our goal of writing the record was not to recreate the wheel, but to recreate how the wheel rolls"

Though Earth Groans has chaos at their fingertips, their passionate lyrics of hope is the overflow of their hearts. Earth Groans uses their music to connect with their listeners in hopes to relate and inspire. "My goal as an artist will never be, to become famous or make lots of money, if I wanted to make money I would have become a doctor or a lawyer. My sole purpose in this is to truly connect with the hearts of our listeners and create a relationship with them. Even if I only connect with one single person through our music or lyrics, I feel like it was worth all of the work."