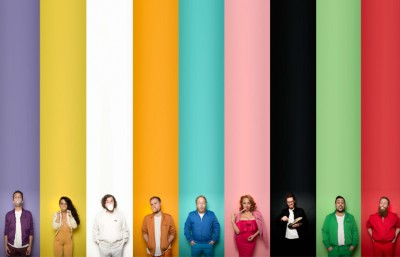 Turkuaz is a 9-piece “Powerfunk” outfit from Brooklyn, NY, whose modern take on the classic funk sound has established them as leaders in the funk revolution that’s currently taking place in the genre. Blending elements of Pop, R&B, and Soul with their distinct aggressive funk core, Turkuaz sounds like the musical love child of Sly & the Family Stone and Talking Heads.

With the release of their new album Digitonium, Turkuaz’s sound is more accessible than ever and poised to break out to a more mainstream audience. With a playful feel that evokes the best of 80s dance music, Turkuaz’s tightly arranged songs are built on thick grooves, driven by powerhouse rhythm and horn sections, as well as four distinct vocalists.

Turkuaz’s crossover appeal has never been more evident– from a recent video performance going viral and receiving over 2 million Facebook views, to their music providing the soundtrack to New York Knicks games at Madison Square Garden, to constant rotation on Sirius XM Radio, Turkuaz is, as Relix Magazine says, “on the verge.”

“Turkuaz’s rapid ascension to relevance can be aptly compared to how fast and focused they play onstage.”

“Turkuaz will raise the roof on any given night.”