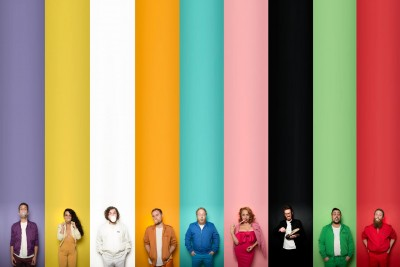 Turkuaz is a 9-piece “Powerfunk” army hailing from Brooklyn, NY, whose modern twist on the classic sound has placed them at the forefront of a new funk evolution. With the obvious influences—Parliament, Sly & The Family Stone, Rick James and Zapp and Roger—as the basis for a recipe, Turkuaz adds healthy doses of Talking Heads inspired jittery, world-pop-dance grooves and a passion for The Beatles, Motown and R&B into the mix, resulting in a refreshing update to the funk idiom.
A universally appealing dance band at its core, Turkuaz’s tightly arranged songs are built on thick grooves, driven by a powerhouse rhythm section and interlaced with swirling guitar lines and synthy keyboard riffs. Over the top, lyrical jabs and swells that serve as both subject matter and rhythmic reinforcement are delivered by four distinct vocalists, framed by horn lines and punctuated with left hooks and right angles. Whereas there are certainly talented improvisers in this extremely musical band, Turkuaz engages bodies and minds with its densely layered compositions, setting the stage for the soaring exploratory guitar and horn solos with no room for noodling. This is perfect for those who want to dance. As for the “headier” crowd showing up for the “jams”—these die hard music lovers are always more than satiated by Turkuaz. They are transported by an irresistible groove, bowled over by a devastating solo and swept up in the impressionistic, occasionally Dadaesque and often seemingly free associative lyrics that—upon closer consideration—reveal unexpected depths of insight, mystery and wry humor in equal parts.

"Turkuaz's rapid ascension to relevance can be aptly compared to how fast and focused they play onstage."
- Relix Magazine

"Turkuaz will raise the roof on any given night."
- Live For Live Music

Since hitting the road in mid-2012, Turkuaz has been touring non-stop, amassing a solid, passionate coast-to-coast fan base that grows with every mile driven and each night on stage. This traveling circus is more than a live juggernaut, however: Turkuaz is remarkably prolific in the studio, as well, and continues to write fresh music, pushing their creative boundaries even as they are promoting a new release. On April 14, 2015, Turkuaz will release the Stereochrome EP (Techne Records), fifty-four weeks after presenting the highly successful independent album Future 86, their third full-length studio album of original music. Recorded at Brooklyn’s Galaxy Smith Studios on vintage gear and captured on 1/2 inch tape with analog production techniques, Stereochrome is both a reverent homage to the past and a look over the horizon at the dawning of a new day. The four tracks are all in their own ways tributes to some of Turkuaz’s favorite recording artists, from The Beatles to Ray Charles and The Band to James Brown, all of whom have had a profound influence on the Powerfunk sound that Turkuaz fans know today. In some ways, Stereochrome closes a door on this warm den where the greats recline on stuffed leather sofas like the gods and goddesses of a gilded age… and with the closing of that door, Stereochrome opens a portal to the future of the Powerfunk sound… a future that is defined by the 2015 Fall release of Turkuaz’s latest full-length record: Digitonium…