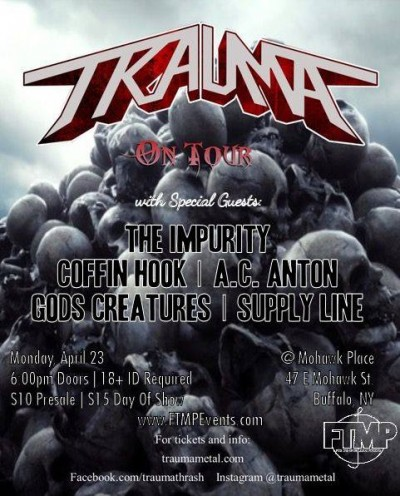 TRAUMA is highly revered by those in the know as an important evolutionary entity in the intersection of traditional heavy metal, the New Wave Of British Heavy Metal, and the more melodically minded classic rock influenced bands on the Sunset Strip.

This is the band responsible for the much sought after classic ‘80s album, Scratch and Scream, featuring killer cuts like “The Day All Hell Broke Loose” and “Lay Low.” Three decades passed before the reconfigured band reemerged in support of a re-mastered edition of their debut and delivered its 2015 follow-up, Rapture and Wrath.

Soaring melodies and fierce riffs collide in songs that are equal parts sharp, fierce, grandiose, and theatrical. Since their formation, they’ve assembled the strongest elements of seemingly disparate strains of metal, with passion and proficiency.

With reverence for the past but eyes sharply focused on the future, TRAUMA enters 2017 preparing new material for what is certain to be a landmark third album, staying true to the signature sound that came before but with a very modern edge. The potential for heavy metal greatness inherent in the revitalized lineup of veterans is powerful.

Instantly familiar vocals and melodies merge with modern riffage in the TRAUMA of today, a band that stands renewed and reinvigorated with a new lineup of seasoned players functioning as a supergroup assemblage centered around a classic nucleus.

Cofounder/vocalist Donny Hillier and longtime Trauma drummer Kris Gustofson put together a monstrous lineup of amazing players. Guitarist Joe Fraulob is a former member of multiplatinum hard rockers Danzig. Steve Robello plays guitar in Dublin Death Patrol, the Bay Area supergroup formed by the singers of Exodus and Testament, and was formerly with the group Heist. Bassist Greg Christian, the newest addition to Trauma, was a founding member and integral part of Testament.

TRAUMA was born in California’s Bay Area in 1980, a crucial year for metal music. It was within that fertile musical climate that TRAUMA developed a sound evoking the electric energy in the air around them. Donny Hillier consumed a steady diet of Zeppelin and Sabbath and shared a love of Priest and Maiden with guitarist Mike Overton. And of course there was Trauma’s legendary early bassist, Cliff Burton.

In 2013’s Birth School Metallica Death: The Inside Story of Metallica, legendary Bay Area thrash singer Steve “Zetro” Souza of Exodus recalled seeing Trauma as a music-hungry teenager. As Zetro remembered it, several voices in the Northern California scene heralded Trauma as “the next big thing” to emerge from the Bay.

The band built a strong reputation in places like The Stone, late music impresario Bill Graham’s Wolfgang’s venue, and Hollywood landmarks The Troubadour and Whiskey-A-Go-Go, a launching pad for The Doors, Van Halen, and Guns N’ Roses.

Much like Metallica, Trauma’s first recorded appearance was as part of the compilation series curated by Metal Blade Records. Metal Massacre II (1982) featured “Such a Shame.” The band shot a video for the song “The Warlock” in Santa Ana, California, not long before Burton left the group to join Metallica. New members entered the fold, including powerhouse double kick drummer Gustofson.

As fate would have it, TRAUMA did not survive the era, but much like the Misfits and other important bands who accomplished so much in such a short time while flying under the radar, the story of the band grew for generations of fans; enough that demand continued for their seminal debut, the follow-up album, and the group’s first ever appearances overseas, most notably at Germany’s Headbangers Open Air.

The Big 4 of Thrash Metal continue to deliver the goods. Iron Maiden concerts are cross -cultural events for legions of fans around the world. Judas Priest churns out incredible albums. New generations of fans form vintage sounding thrash bands everyday. And the Bay Area’s prodigal sons, TRAUMA, are ready as ever to attack.