The Song of Bethlehem Screening with The LA Hustle
Thursday 12th Jul, 2018 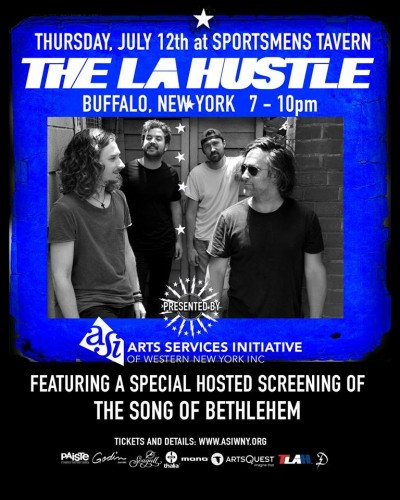 Emmy-winning filmmaker and musician Ken Goldstein will be in Buffalo for a special screening of his documentary A Song of Bethlehem. His band, The LA Hustle, will perform following the screening at Sportsmen’s Tavern.

The 30-minute documentary explores the impact of The Bethlehem Steel Company closures in the communities in which those factories resided, the reuse of the Bethlehem PA factory as an art/music space and the re-creation of his song The Song of Bethlehem.

THE LA HUSTLE is an American "Dempsey Blues" band from Los Angeles, California formed by singer/songwriter Ken Goldstein (aka Jack Dempsey) and drummer Daniel Thomson of The Calling in 2015.

Prior to the show, there will be an opportunity to view the documentary The Song of Bethlehem on the large stage screens in an informal setting.