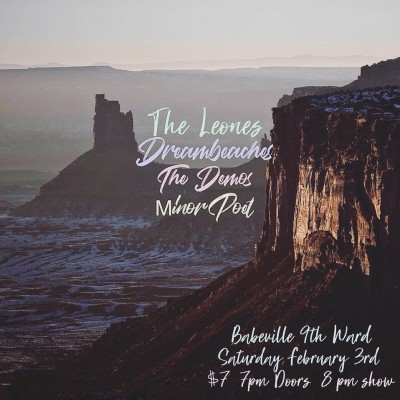 The Leones with Dreambeaches, The Demos, and Minor Poet live in the 9th Ward

Backed by vintage bass lines and layers of soundscape synths from Wren Williams Werner and dynamic drumming from Kevin Carney the quartet touch on everything from the desolate end of Neil Young and Crazy Horse, into Jim James and The War on Drugs territory and most currently- Beach House and Wild Nothing.

Their slew of synthy, summer night horror stories are featured on the October 2016 release – “Ghost in the City”. Like the Twin Peaks inspired “Fire Walk With Me” and the desolate, minor keyed “Eyes”.

The band’s Summer 2017 release “Songs From The Canyon” explores finding one’s self out on the open road of the West. The driving opener, “Coast” sets the stage while the chorus of “Dealer” explodes with layers of lush vocal harmonies and searing synths. Their 16 minute opus “Canyon” is filled with soaring peaks and heart-aching valleys that are sure to create deep connections with the listener. Carlos Castaneda would dig!

Dreambeaches is danceable baroque rock among other scattered influences. they released their second EP ‘Disappearing Act’ in the fall of 2017 through Admirable Traits records and are in the works of adding new members and working on a full length.

Minor Poet is the brainchild of Richmond, VA’s Andrew Carter.