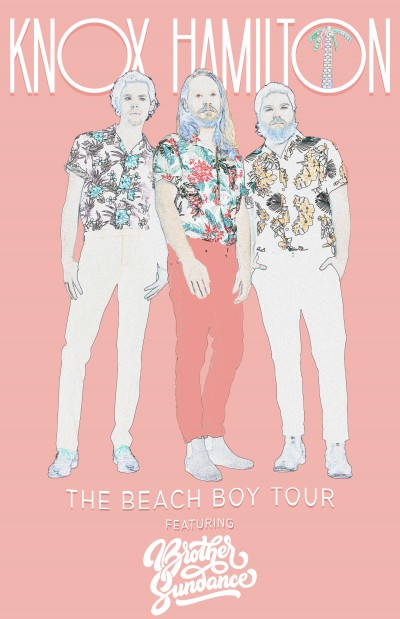 Knox Hamilton
Brothers Boots and Cobo Copeland have been making music together their entire lives. From an early age, they self-taught themselves drums, guitar, and bass, filling their pastor father's church with songs bathed in light and life. It's the bond between Boots and Cobo that gives Knox Hamilton's music a degree of familial intuition; a genetic thread of energy running between the two.

Knox Hamilton (comprised of Boots and Cobo and their longtime buddy and talented guitarist Drew Buffington) doesn't make songs by mistake. Rather, they work hard at their craft, stacking gorgeous vocals on top of relatable lyrics and restless melodies. Every note, every chord, every lyric is intentionally created to wrap your mind in a warm embrace while still setting your soul free to wander the cosmos. One listen to the first single "Washed Up Together" from their debut album The Heights and you'll agree the result is hard to argue with. Creating music that nods to their small-town church roots while dedicating themselves to their far-reaching artistry, Knox Hamilton is a band built to last. And Boots, Cobo, and Drew are prepared to make that happen.

Brother Sundance
19-year old Rylan Talerico, a self-taught musician/producer, performs and records as Brother Sundance. Rylan began playing the drums at the age of two and spent hours at his kit teaching himself his favorite songs as a child. Later, as a teenager, he picked up the guitar and began to sing, which eventually culminated in creating a punk-blues band, Wallace, with a group of friends. Wallace gained quick popularity, playing the South Florida underground circuit heavily for a year, and winning a Song of The Year award from The New Times Magazine.

The Brother Sundance debut EP, Honey, is out now. The single Blind, has already been streamed over 5 million times, and he was selected as Apple Music's New Artist of the Week. He's also been featured on the Best of the Week Playlist several times and was named as a top 25 viral band in Canada by Spotify.