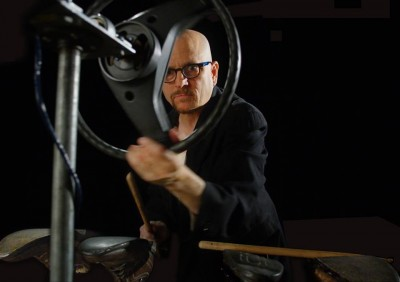 RADIO WONDERLAND is Joshua Fried, performing live digital processing of live FM radio, pulverizing mass media into little audio bits that groove. Joshua Fried emerged from New York's downtown experimental music and East Village performance art scenes of the 1980s. Fried's 1986 recording "Jimmy Because," with guest guitarist Fred Frith, was released by Atlantic Records. Composer-performer Joshua Fried's work spans experimental music, DJ culture and live art. Known to some for his They Might Be Giants remixes, to others for RADIO WONDERLAND's shoes and wheel computer controllers, and to still others for putting headphones on downtown's most mercurial stars. His production credits include the aforementioned TMBG as well as Chaka Khan, Ofra Haza, and avant drone-master David First.

All sound is sampled live from the airwaves. Fried manipulates it with custom audio processing software, which he controls by hitting old shoes with sticks (he's a long-time drummer) and rotating a vintage Buick steering wheel (Fried is the world’s #1 player of The Musical Wheel).

Fried walks on with a boom box, playing FM radio LIVE. Once onstage, he plugs it into his system and starts slicing up radio. Fried arranges those slices both rhythmically, and, by playing them at different speeds, melodically as well. Audiences witness Fried build grooves, step by step, out of recognizable radio, and even UN-process those grooves back to the original radio source. The sum total is dance music, in a context that's far more performative than any DJ booth. Every show is radically different, naturally—because the source material is different each time.

RADIO WONDERLAND is both a solo performance and a journey. The journey is the transformation of the (seemingly) unalterable poison of commercial broadcast media into the ephemeral beauty of a live collage, subverting that poison and the corporate intentions behind it. The public relives this journey with each RADIO WONDERLAND event. It must be done for a group. Once people realize Fried is destroying the media with metrical precision, they start to dance. So the transformations are necessarily clear and simple--framing, repeating, shifting. Using ordinary objects underscores the usual absurd disconnect between digital controller and sound, and the fun simplicity of the algorithms. So, too, the riffs must be vernacular, not elite. We've got to get down.