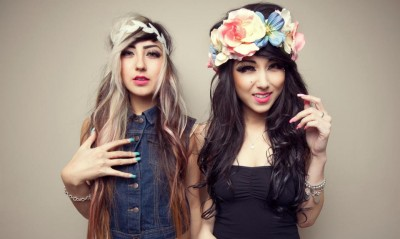 Can you “Party Like a Millionaire?” Chances are you couldn’t keep up with the Orange County duo —Melissa Marie Green and Allison Green — aka the MILLIONAIRES!
MILLIONAIRES bring catchy, fun, electro-pop songs mixed with rap (made by cute, foul-mouthed sisters whom are both barely legal and are always down to get F*cked Up!
The girls started out as a garage band internet sensation and have transformed into a successful national touring act while never being signed to a label, they know they’re hated by many but they DGAF! They just want to have a good time, doing what they love, putting on a FUN, ELECTRIC PERFORMANCE FOR THEIR TWDC! (Til’ We Die Crew). Millionaires know it’s been a combination of a strong DIY work ethic, a unique sense of style and a willingness to put their dirty, in-your-face songs into the scrutiny of the publics eye that has transformed them from a one-time joke to a respected serious group.
They started their careers headlining two sold out tours and then taking on the Warped Tour ’09 stage, and then to return for two more headlined tours all before their first album. To go along with there unorthodox careers as artists, they just released their debut rap mix-tape which features huge nation wide artist such as Trina, Kreayshawn, Shanel of young money, Diamond, and more, the mix-tape has been viewed over 100,000 times on a website that is host to the lights of Drake, Lil Wayne, and Wiz Khalifa fans, from which they made the top mix-tapes of the month, and hottest mix-tapes of the week, and have earned bronze with over 25,000 downloads. On March 13, 2013 Millionaires released their debut album 'TONIGHT' which rose into the top 100 albums and top 25 pop albums. Billboard.com ranked 'TONIGHT' #43 on the heatseekers album chart.
Millionaires are aware that a lot people have a lot of nasty things to say about them and their music. And you know what? They don’t give a F*ck, keep talking.