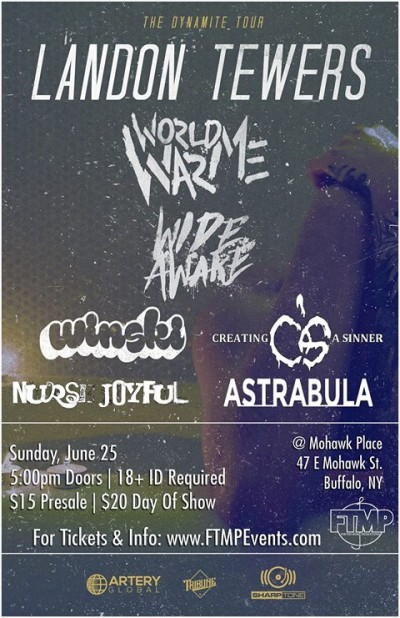 Landon Tewers of THE PLOT IN YOU
w/ World War Me, Wide Awake, Winski, Creating A Sinner, Nurse Joyful, & Astrabula

Landon Tewers is an American musician and producer. He joined post-hardcore group Before Their Eyes in 2008 playing the guitars and screamed vocals, replacing Cory Ridenour. He performed in "Life Was All a Dream" in 2008 and in "Untouchable" in 2010. However, after taking part in these releases, he left the band the same year, soon being replaced by Evan McKeever.

Afterwards, Landon went on to form a new metalcore/deathcore project in 2010 originally named Vessels. The group released its debut EP "Wife Beater" the same year. However, the same year, the band underwent a name change and continued under the moniker The Plot In You. Since then, the band has released their debut full-length record "First Born" in 2011, and then their sophomore effort "Could You Watch Your Children Burn" in 2013, with Landon producing all of the band's music. The Plot in You then announced their signing with Stay Sick Recordings and, Happiness in Self Destruction, was released October 16, 2015.