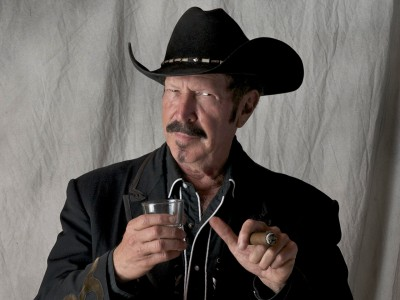 Kinky Friedman: At long last, Kinky Friedman’s second musical act begins. With the proclamation that it “is what music was, before it came homogenized, trivialized and sanitized,” Kinky is dropping his first all new cd of original tunes in four decades. Called Circus Of Life, it presents a side of Kinky that few would have suspected in the halcyon days of the Texas Jewboys, laying perhaps legit claim to the title, “The Leonard Cohen of Texas.”

And on July 3rd, he will be releasing it on his own terms and on his own Echo Hill Records label. A monster summer tour will follow in June, July, and August. Yep, Kinky is finally doing it his way. Harking to his early years, he has chosen to ignore the Nashville ethos, that all must be concertedly “radio friendly,” sweetened, and over-produced. What he and producer Brian Molnar have delivered is simply one of the most beautiful albums of this year or any other. The first single, Autographs In The Rain (Song To Willie) is already in heavy rotation on SiriusXM Outlaw Country, and there are at least four more top shelf A sides.

Speaking of Brian Molnar, he will be touring as Kinky’s opening act for most, if not all shows, promoting his new cd, Within Blue, also on the Echo Hill Records imprint. Kinky and Brian have worked a number of tours together and now deliver a seamless performance, opener to headliner.

It started with a call from Willie (Nelson, of course), who asked Kinky what he was doing at that moment. Kinky answered truthfully that he was watching Matlock, the old TV chestnut, to which Willie replied, “That is a sure sign of depression, Kinky. Turn Matlock off and start writing.”

Kinky did just that and started writing the songs he hadn’t written or even contemplated for decades, tunes like Jesus In Pajamas, Me And My Guitar, and A Dog Named Freedom. After writing several songs, Kinky called Willie to let him know how successful his advice had been. When Kinky asked Willie how he was doing, Willie replied, “A little up, a little down. By the way Kinky, what channel is Matlock on?” The Circus Of Life, by way of Matlock. Via Willie.

With Joe Cirotti on multiple instruments, and Mickey Raphael, Augie Meyers, Original Jewboy Little Jewford, Clay Meyers and Jim Beal providing amazing grace notes, not a single track on the album fails to reach its very high mark. Kinky may “just have to stick with songwriting” after all. To verify this, he’s taking it on the road, for one of the longest, most comprehensive tours of his storied career. After flash mob-style appearances in Galveston, Houston and Nacogdoches, TX, the Circus Of Life Tour begins in earnest in Pittsburgh, and rumor has it that it will continue on forever. Yes, the second act has begun. May it never end.ongs of Kinky Friedman, and a second tribute volume was planned. Vanguard released a 30th anniversary edition of Sold American (which included a couple of bonus tracks) in 2003. Mayhem Aforethought appeared in June of 2005, followed by They Ain’t Making Jews Like Jesus Anymore later that October.