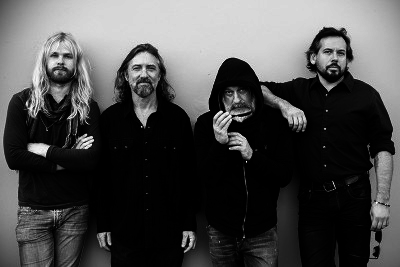 Jerry Joseph and the Jackmormons

“I told my 5 year old I was worried about his dream of being an astrophysicist and going to Mars. I thought it was a long trip away from me and a dangerous trip and didn’t think I wanted him to go. He replied, ‘Oh papa, you’ll be in heaven a long time before I get to Mars,’ a sobering thought for my 54-year-old self,”  Jerry Joseph recalls. “I was on my way to Afghanistan to bring musical equipment and teach kids to play guitar and do a couple shows and I was having a difficult time leaving my own children for a long and sketchy trip.”

In 2014, Jerry Joseph headed to Afghanistan to volunteer as a teacher at an underground co-ed rock school. With thoughts of family on his mind and the backdrop of Kabul, Joseph began to write what would become the songs of By The Time Your Rocket Gets To Mars. “There’s a lot of downtime in Kabul hanging around in walled courtyards listening to the daily call to prayers and American Blackhawk helicopters so I started writing. My point was not to write ‘war’ songs. I wanted to write about magic and God and humans being human.”

Joseph has been called the “the Anthony Bourdain of touring musicians” (Marquee Magazine). Like Bourdain, Joseph is drawn to far-flung, under-explored locales, and has spent the past several years touring in destinations like Lebanon, Iceland, Cambodia and Israel. Music and global politics came together for him early, the grandson of Lebanese, Syrian and Irish Catholic immigrants, surfing the beaches, playing in reggae and rock bands and spinning singles by The Clash while growing up in La Jolla, California and Wellington, New Zealand.

Since then, Joseph has stayed busy, touring 150 dates a year and releasing more than 30 records with a catalog of over 250 original songs and counting. For the first time since he was a teenager, Joseph plans to return to New Zealand and Australia as part of the release tour for By the Time Your Rocket Gets to Mars.

Recorded at TRI Studios, produced by Dave Schools (J Mascis and the Fog, Hard Working Americans, Stockholm Syndrome), mixed by Jim Scott (Tom Petty, Wilco) and featuring Joseph’s full band, Steve Drizos on drums, Steven James Wright on bass andJeff Crosby on guitar, as well as special guests Mookie Siegel on keyboard, Scott Lawand Steve Kimock on guitar, Jason Crosby on piano andMichael Lewis (Blue Skies For Black Hearts) on vocals, By The Time Your Rocket Gets To Mars is the second of three full length records resulting from these sessions. The first, Istanbul/Fog of War, released in October 2015 is two songs, 31 minutes of music, recorded in one take. The third in the series is tentatively scheduled to be released in Fall of 2016.

Portland’s Voodoo Doughnut Recordings in collaboration with Joseph’s own Cosmo Sex School Records will release By The Time Your Rocket Gets To Mars on April 15, 2016. The recent Oregon Music Hall of Fame Inductee is excited to work with this local label for the first time on this release.