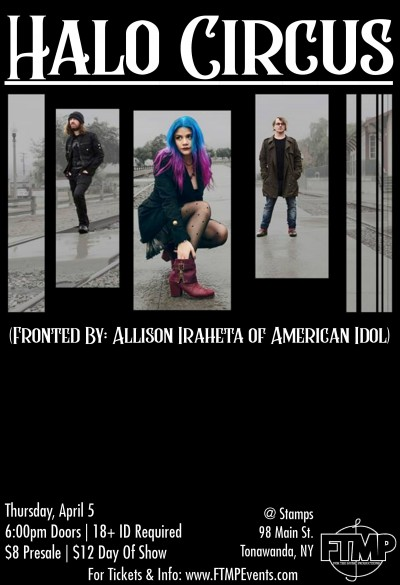 Halo Circus quickly earned a reputation for their impressive live performances, which led to a series of high profile bookings, including: The Grammys "Women Who Rock ­ Festival At Sea" with Heart, Emmylou Harris, and other iconic female singers; a four­ week Friday night residency at the prestigious Hotel Cafe in Los Angeles; and "Say It Loud! A Night of Cultural Disruption" at the legendary Troubadour. Iraheta also performed on The Tonight Show, making history as the only guest vocalist to sing with the show’s band for an entire week.

On February 8, 2016, Halo Circus shocked the music industry by announcing, via Billboard, the first fully crowd­sourced American tour ever to be attempted on such a large scale. Through Road Nation, the campaign reached 100% backing by fans, making music history with the first successful US crowd­funded tour to date, with 30 cities which they completed Nov 11 at The Hotel Cafe in Los Angeles to a packed house and rave reviews.

The release of Halo Circus’ highly anticipated debut album, Bunny, produced by Matthew Hager and mixed by multiple Grammy Award-winner Craig Bauer (Kanye West, Smashing Pumpkins) was heralded by fans and critics alike making multiple "Best of 2016" lists and continues to gain in popularity. Iraheta explains, “our aim was high: play as much as possible, and try to develop a reputation as a great live band before releasing an album. Somehow along the way we learned how to play these songs to an audience and the band actually started to take on a life of its own.”
And this band’s effort for perfection is paying off. The first single off the album, "Desire (Lo Que Vale La Pena)," was downloaded 647,000 times in its first week of release in a promotion with BitTorrent Bundle.

Iraheta concludes, “Magic happens in this band. It happened when we were writing, when we were recording, and when we were failing. The only thing that mattered was keeping it honest and getting it right, whatever that means. We may be inconvenient, but we continue to attract believers.”