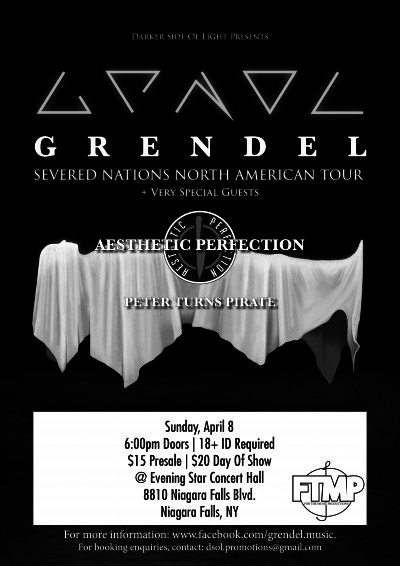 Using the grisly tale behind the name “Grendel” as a basis for their music, Grendel has successfully emerged as a dark and chaotic force in the underground electronic scene. In 1997 Grendel was formed although this was not the band's original name. It wasn't until the band as it was known split up that the remaining members decided to change the name. “Grendel” was a beast in the classic mythological story of “Beowulf” that would lure people from villages and drown them in marshes. The new name and line up helped to create a unique aura for the band that attracted thousands of fans across Europe.

In 2012, Grendel returned with their full length album, entitled "Timewave Zero" on Infacted Recordings (EU) & Metropolis Records (North America). This marked a new milestone in the band's history, raising the band's profile to a whole new level, gaining critical acclaim in the media, becoming a staple DJ record and topping scene charts world wide (including DAC & GEWC). With this record the live act was expanded and the band continued to develop it's sound. The band recently just completed work on their latest album, "Age Of The Disposable Body", which was released in 2017 by Infacted Recordings & Metropolis Records.

No love – just lies. In the blink of an eye, an explosion decays, eclipsed by the rhythm of a march; a raging inferno dwindles to ember before igniting again. Aesthetic Perfection’s new single, “Love like lies,” contemplates the perils of passion and the menace of ambition. Delivering his signature, multifaceted style, Daniel Graves stitches together industrial, trap, and dark pop in an imaginative new step forward for Aesthetic Perfection.

Aesthetic Perfections is the solo project of Los Angeles-based producer Daniel Graves. Over a career spanning 15 years, five full-length-albums, and numerous singles and music videos, Graves has reinvented what it means to be a dark electro artist, combining industrial, pop, goth, and everything inbetween. Aesthetic Perfection defies definitions in a world that demands them.

Peter Turns Pirate (PTP), a solo artist based out of Toronto Canada, has been evolving his craft since 2004. His shows guide the viewer into a world of imagination and intrigue. Known for his theatrical and dramatic live setting, Peter Turns Pirate transforms the stage into his own playground. His music is a mesh of metal, electronics, pop, ambient and experimental influences. His shows include eclectic wardrobe selections along with special effects that illuminate each of his performances. Peter Turns Pirate is a true spectacle that cannot be missed.