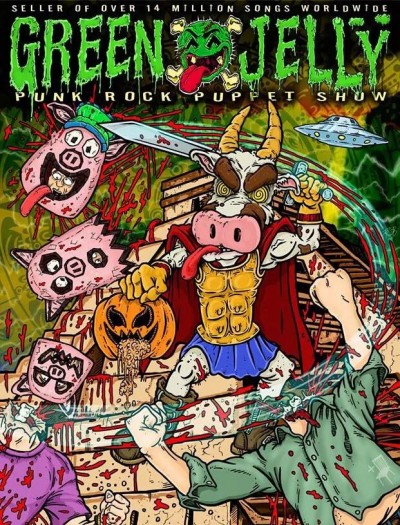 Green Jellÿ (pronounced "green jello") was formed in 1981 in Kenmore, NY by founding member Bill Manspeaker. Originally named Green Jellö, the band changed its name due to legal pressure from the owners of the Jell-O trademark, Kraft Foods, who claimed that it was an infringement of their trademark. Throughout the early 80’s, Green Jellÿ performed throughout NY, opening for bands like The Ramones and New York Dolls. Their reputation for over-the-top live performances and food-hurling audiences got them banned from most local venues.

After finding local success, many of the members relocated to Hollywood, CA where they quickly became a fixture of the underground scene. Green Jellÿ then struck up an instant friendship with GWAR bonding with their mutual love of costumes and onstage antics. By this time, the band consisted of usually 20 members including new characters such as "Cowgod", "Rock n Roll Pumpkin", and "Satan's Ham." At one point even Danny Carey and Maynard James Keenan of Tool made the Green Jellÿ roster.

In 1992, Zoo Entertainment, a subsidiary of BMG, released Green Jellÿ’s “Cereal Killer,” an all video album including MTV hit, “The Three Little Pigs.” The following year, Zoo released an audio version of the album called, “Cereal Killer Soundtrack.” This album went gold in the US, and sold nearly 2.5 million units worldwide. The success led BMG to open Green Jellÿ studios in Hollywood, where the band recorded Grammy nominated, “333.” “333” includes “The Bear Song” from the Farrelly Brother’s film, Dumb and Dumber.

In the following years, Green Jellÿ continued to break the mold as they wrote the first ever video game soundtrack for Acclaim Entertainment video game, Spider Man & Venom: Maximum Carnage. Although they never officially broke up, band members went their separate ways until early 2008 when they reemerged for a US tour supporting a re-release of the Cereal Killer and 333 video/albums on DVD.

After performing over 125 shows last year, all of them rife with the comedic and animated goodness that made Green Jellÿ a household name, the band is now preparing for another US tour to support their newest record “Musick To Insult Your Intelligence By” on Los Angeles based Rotten Records. This tour which will be bigger, better and fatter than ever promises to be more along the lines of a traveling Mardi Gras parade; with enough costumes and enough foodstuff to make Anthony Bourdain’s mouth water.