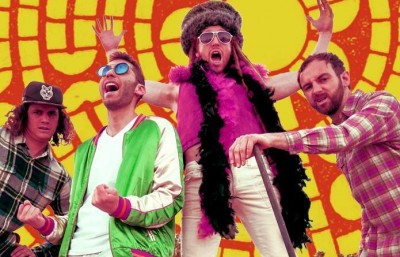 G-Nome Project has been regarded as “Israel’s premier Livetronica band” by the likes of Relix Magazine, performing what Live For Live Music deems “impressive and surprising shows.”

Formed in September 2012, G-Nome Project is rapidly building one of the most loyal fan bases in the country, packing venues to capacity in their home city, Jerusalem, and expanding rapidly to the heart of the artistic scene in Israel’s center in greater Tel Aviv. The band is comprised from a super group of four nationally renowned musicians – Eyal Salomon, Zechariah Reich, Eli Schabes, and Shlomo Langer – who each bring a distinctive flavor to the dynamic electro-funk palate of this Jerusalem-based quartet.

Fans of many backgrounds flock to the band’s shows for the music, good vibes, and hardcore dancing that exemplify the character of the G-Nome community. Building on their success in the Middle East, the band has embarked on nine international tours in North America and will be returning to the U.S. throughout 2018.

Tweed: Philadelphia’s funktronica powerhouse, Tweed, is filling dance floors with their high-energy fusion of funk, rock, and electronica. Just as their namesake fabric of mingling colors and textures, Tweedhas interwoven a psychedelic web of high energy performance and improvisation. Their collaboration can take listeners from multi-layered visions through the psyche to sweaty, raging, disco dance parties driven by their own incessant beat. With national tours, countless festival appearances, and a uniquely cohesive sound, they have proven they can bring the fun anywhere they go.