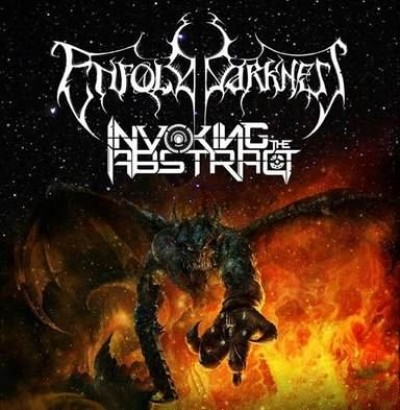 Much like the folks over at MetalSucks, when we heard the all too familiar sound of Sumerian Records signing someone new and obscure from the death metal community, we were both excited — but a little bit unsure. But seeing how Enfold Darkness‘ latest effort, “Our Cursed Rapture,” sports a very familiar, Demon Hunter-esque cover, and shows all the signs of being one of the many standard death metal acts that you could stumble upon while browsing sites like Lambgoat. Of course every so often, there will be a hyper death metal band that will manage to step up and deliver something more than simple monstrous double bass and darkened growls.

Now that we got that out of the way, I won’t say that Enfold Darkness necessarily brings the newest or most evolved sound in their latest effort “Our Cursed Rapture,” but it packs one hell of a punch. Akin to bands like The Black Dahlia Murder and Cradle Of Filth, a fierce death metal assault charges at the listener. This album has such guitar ferocity, at times you might think you are listening to a Dragonforce record, because not only does the Matt Brown‘s fretwork shine — but it is pretty much makes up 95% of the record. It is also far from one-dimensional — as there is everything from blisteringly fast solos, complex building pieces, and even calm and intricate, Euro-metal acoustic interludes, such as “Altars Of Perdition.”

Vocally, Justin Corser‘s Dani Filth impression is spot on. What, it wasn’t meant to be an impression? Well his sharp shrieks bring nothing to mind except Dani, so too bad. Don’t worry, even though almost every death metal band tries to get their vocals to have that shrieky pitch, which sometimes leads to many bands sounding the same, it really does suit Enfold Darkness‘ swift pace and charging guitars well. If you’re wondering why I am speaking generally about the album, it’s because much of “Our Cursed Rapture” has the same feel and chooses to go in the same direction. But since that direction is one filled with godly guitars and relentless drumming (blast beats and all), then I can’t really do anything but love this record. Those In Flames-esque interludes are like the cherry on top of this metal cake made with mercury icing.

Enfold Darkness can really throw down with the best in the melodic death metal genre and this album proves it time and time again. If you like bands that blitzkrieg with wild guitars and drums that hit at 300 beats per minute, but also enjoy the finer things in life such as an intellectual acoustic bridge, then pick this obscure, yet very technical release. Because while the vocals are a bit overdone, the strings in this CD are ever-busy and near flawless.[taken from BringOnMixedReviews.com]

Formed in January of 2010, Invoking the Abstract (managed by CB Entertainment) is just four dudes who love to shred, while taking every step to evolve musically and progress to the next plateau.