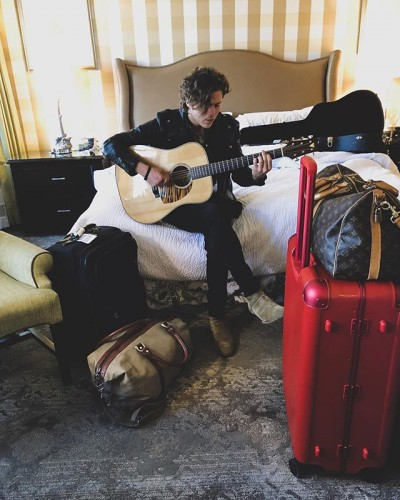 “Christian Lopez is not merely riding the wave of Americana Music, the West Virginia native, is bending it to its knees. With the will of his voice and the stomp of a steady beat, Christian Lopez and his band are pioneering their own brand of Alt. Folk Country Rock. Like a young Whitman, Lopez translates the iconic America before him into rousing romps and searing serenades employing crisp and thoughtful imagery and storytelling. Lopez is turning traditional songwriting on its head. Lopez takes listeners on a heartfelt rampage through emotion, energy and excitement caring less about the hook then hooking them in with the range and passion in his voice. One moment the music traverses the depths of one’s interior life and the next it rips the listener into a frenzy – a call to stomp, romp and roll..”

Christian Lopez (born 1995) is an American singer-songwriter and multi-instrumentalist from Martinsburg, West Virginia. His mother, an opera singer & music teacher, started him in out at an early age, learning the piano at age 5 and guitar at age 9. He began songwriting in his early teenage years, and was touring before the age of 16. In 2013, Lopez signed a record deal with Blaster Records. Shortly thereafter, he recorded his first release, the five song EP Pilot, which was released in October 2014, followed by his first full length album “Onward” released in May 2015, produced by Grammy Winning producer, Dave Cobb. (Chris Stapleton, Jason Isbell, Sturgill Simpson)

Lopez and his band went on to headline shows of his own throughout the US, but has still stepped out to perform alongside fellow acts like, Miranda Lambert, The Black Lillies, Brothers Osborne, Marty Stuart, and even earned a spot on The Vans Warped Tour. Lopez also won the Belk Modern Musician Showcase talent search and invited to join Belk’s 2015 “Modern Southern Music” tour landing them bills with Zac Brown Band, Dave Matthews Band, Blake Shelton, and more.

In September, 2017, Lopez released his sophomore album entitled, Red Arrow, this time alongside producer Marshall Altman. The. album features included some of Lopez’s favorites, Vince Gill’, The Milk Carton Kids’ Kenneth Pattengale, and studio legends like Stuart Duncan and Jerry Row. Rolling Stone said that Red Arrow “flies straight through multiple eras of rock, pop and country. Organic sounds are favored over electronics, while Lopez’s versatile guitar playing provides a millennial take on everything from Eighties rock to timeless folk. Sly, generation-bridging vocals are the common thread, and as interest in Americana rises, Lopez could connect the dots for many young listeners.” In the days leading up to its release, Rolling Stone named Lopez “One of the 10 New Country Artists You Need To Know” as well as “One Of The Best Things We Saw” at Americanafest Nashville for the 2nd year in a row.

“Red Arrow” became a milestone for this emerging artist. On “Don’t Wanna Say Goodnight,” Lopez kicks into high gear, riding by the rockabilly rhythm as if hearing it for the first time. A different innocence informs “Swim The River,” through lyrics that conjure the thrill of young love. On the other hand, “1972” is a disarmingly affectionate tribute to his International Harvester Scout — and the romantic adventures it has witnessed. Writing with Mindy Smith and Josh Williams, Lopez came up with “Still On Its Feet,” an eloquent analogy equating beloved old piece of furniture with one who has weathered hard times; Vince Gill’s guitar accompanies Lopez’s intimate vocal. And for more classic harmony singing, look no further than “Caramel,” where Lopez and Kenneth Pattengale of Milk Carton Kids blend their voices and acoustic guitars with a synchronicity the Everly Brothers might have admired.

There’s much more as well, but pay special attention to “Steel On The Water.” Lopez wrote this one alone, on his last night aboard the aircraft carrier USS John C. Stennis en route from Pearl Harbor to San Diego. Brought onboard to entertain 5,000 sailors on their way home, he ended up at least as moved by their stories as they were by his music.

“This is maybe the most personal song I’ve written yet,” Lopez says. “When you come from the outside and join a bunch of people who’ve been living on that ship for years at a time, they gravitate toward you. They want to talk with you. They tell you everything. You’re almost like a refuge to them. It’s overwhelming, especially coming from kids your age.”

Lopez was struck especially with the parallel he sensed between their lives and his as he embarks ever further and for longer hauls away from his West Virginia home. But he understood the differences in their missions too. “The first lines talk about how ‘some go for school; some go for tradition and some go for a last resort.’ I had conversations with people on that ship who had done those things. I was so emotional when it was time to leave them.”

On these songs and the album’s six other offerings, Red Arrow does us a service. For many, it will introduce an artist whose singing radiates youthful infatuation with life through songs rooted in a reverence for American tradition. To those who have already had the pleasure of discovering him, it documents the next stage of a journey toward wisdom, insight, perhaps heartbreak and a fruitful crop of great new songs to come. For Lopez, maybe it’s a ticket on that trip that will lead to faraway places yet end back home in West Virginia. Through his music we travel with him, beginning here.
United States Edit

STAY IN THE KNOW