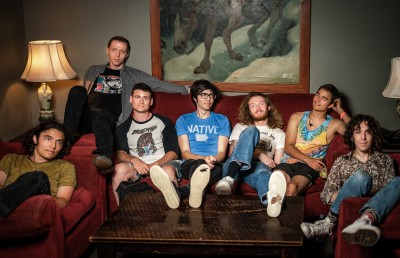 Toledo always knew he would return to Twin Fantasy. He never did complete the work. Not really. Never could square his grand ambitions against his mechanical limitations. Listen to his first attempt, recorded at nineteen on a cheap laptop, and you’ll hear what Brian Eno fondly calls “the sound of failure” – thrilling, extraordinary, and singularly compelling failure. Will’s first love, rendered in the vivid teenage viscera of stolen gin, bruised shins, and weird sex, was an event too momentous for the medium assigned to record it.

Even so, even awkward and amateurish, Twin Fantasy is deeply, truly adored. Legions of reverent listeners carve rituals out of it: sobbing over “Famous Prophets,” making out to ‘Cute Thing’, dancing their asses off as ‘Bodys’ climbs higher, higher. The distortion hardly matters. You can hear him just fine. You can hear everything. And you can feel everything: his hope, his despair, his wild overjoy. He’s trusting you – plural you, thousands of you – with the things he can’t say out loud. “I pretended I was drunk when I came out to my friends,” he sings – and then, caught between truths, backtracks: “I never came out to my friends. We were all on Skype, and I laughed and changed the subject.”

You might be imagining an extended diary entry, an angsty transmission from a bygone LiveJournal set to power chords and cranked to eleven. You would be wrong. Twin Fantasy is not a monologue. Twin Fantasy is a conversation. You know, he sings, that I’m mostly singing about you. This is Will’s greatest strength as a songwriter: he spins his own story, but he’s always telling yours, too. Between nods to local details – Harper’s Ferry, The Yellow Wallpaper, the Monopoly board collecting dust in his back seat – he leaves room for the fragile stuff of your own life, your own loves. From the very beginning, alone in his bedroom, in his last weeks of high school, he knew he was writing anthems. Someday, he hoped, you and I might sing these words back to him.

“It was never a finished work,” Toledo says, “and it wasn’t until last year that I figured out how to finish it.” He has, now, the benefit of a bigger budget, a full band in fine form, and endless time to tinker. According to him, it took eight months of mixing just to get the drums right. But this is no shallow second take, sanitized in studio and scrubbed of feeling. This is the album he always wanted to make. It sounds the way he always wanted it to sound.

It’s been hard, stepping into the shoes of his teenage self, walking back to painful places. There are lyrics he wouldn’t write again, an especially sad song he regards as an albatross. But even as he carries the weight of that younger, wounded Toledo, he moves forward. He grows. He revises, gently, the songs we love so much. In the album’s final moments, in those “apologies to future me’s and you’s,” there is more forgiveness than fury.

This, Toledo says, is the most vital difference between the old and the new: he no longer sees his own story as a tragedy.

He’s not alone no more.

‘SLUFF’ is a word that means both everything and nothing, but it definitely sums up the three distinct personalities that make up Naked Giants. Depending which member you ask, SLUFF is either slang for the black gunk that comes off your shoes when it snows in the winter, an acronym that stands for South Lake Union Fuck Face (a reference to the tech bros who have infiltrated Seattle in recent years) or what a snake does when it sheds its skin. It’s also the title – and a song on – the band’s debut full-length.

Formed in 2015, the Seattle trio – guitarist/vocalist Grant Mullen, bassist/vocalist Gianni Aiello and drummer Henry LaVallee – put out debut EP R.I.P. the following year and have been steadily building up their reputation as a live act in the meantime, and having as much fun as possible while doing it. Because as much as the three-piece – who are all in their very early 20s now – have their heads screwed on and are fiercely intelligent people, they also want to let loose and enjoy being in a band. After all, that’s kind of what being in a band with your closest friends is all about.

“I just want to make as much noise and have as much fun and get as sweaty as I can,” says LaVallee, “and if that resonates with people, that’s who I want in my life. That’s who I want to play music for.”

That clash of the cerebral and the intelligent – the desire to say something meaningful but also just have some fun – is what underpins the very essence of who Naked Giants is. It’s a band of contradictions. Their music, which is simultaneously timeless and modern, new and old, is loud and brash and raw, but there’s vulnerability there, too. In fact, debut album SLUFF is a melting pot of ideas and sounds that, on paper, don’t seem like they would go together, but which form one phenomenally cohesive whole.

“These are songs that we’ve played live for a long time,” explains Mullen. “We wanted to showcase the different kinds of songs we’ve written and put them all onto an album that flows together, making it tie together into something that means something.”

That’s exactly what they do on SLUFF’s twelve weird and wonderful songs. Recorded with producer Steve Fisk (Nirvana/Screaming Trees/Beat Happening/Car Seat Headrest/Low/Minus The Bear) in Seattle at Avast! and Soundhouse Studios over the course of two and a half weeks in October, the record is a dizzying mélange of influences and ideas. It swirls with hyperactive restlessness as 1960s harmonies share space with 1970s riffs while at the same time battling an undercurrent of punk rock and more modern indie influences. The song “TV”, for example, is a kaleidoscope of sound that seems to take in the whole history of rock’n’roll but reframes it in a more contemporary context.

“From our perspective as millennials where everything is accessible all at once,” explains Aiello, “there is no difference to us between punk and classic rock or anything like that because we’re all observing it at the same time through the same lens. And yes, history exists, but if you’re just flipping through something on the TV, it all kind of conflates together – kind of like the song does.”

Needless to say, that song simmers with tension, and it’s not the only one. “Everybody Thinks They Know (But No One Really Knows)” is a jaunty, upbeat jangle but with distinctly sinister undertones, “Slow Dance II” is a sumptuous, soulful track with a desperate, raw and bluesy swagger. “Dat Boi” is a rash of brash guitars that’s soon swept by an off-kilter, psychedelic melody while closer “Shredded Again” is a graceful, lackadaisical comedown after the rush of energy that precedes it. Raucous and rabid, but also considered and complex, Naked Giants’ music is the sum of all their influences and then some. And then some more.

“What’s really interesting to me,” ponders Aiello, “is we have very different influences, so when we’re jamming it’s like it’s being pulled apart and pushed together in so many different directions. And I think that’s a good thing.”

Then, of course, there’s the quasi-grunge title track, which chugs along with an ominous yet uplifting attitude as its title is shouted with a fervent zeal – “SLUFF!” – and which carries with it both the weight of the world and the reckless abandon of youth.

So while Naked Giants are happy to play the role of the dumb, hedonistic rock band, don’t be fooled for a second – they’re one of the brightest, smartest acts out there at the moment. And this is also just the beginning of what they’re already planning to be a long and rewarding career. Even at this early stage, they’re taking it as seriously as they are just having a good time. They have a lot to say and they’re not afraid to say it, but they also relish in what making music has, even already, given back to them.

“Performing on a stage has been very purpose-giving,” says LaVallee. “Being in a group of people all experiencing music together brings a strong sense of community, which excites me. Hopefully going forward we’ll be playing to more and more people. I want us to spread respect and fun rock’n’roll music to a whole lot of people. That just seems like a good deal all around.”

“We’re just here to play music,” says Mullen, “so the more it goes well the more we’ll be thinking about our own art and our own voices. And that’s really the progression of it – personal growth and artistic growth. And whatever people think of that on a greater scale when it reaches them is all kind of up to them.”

“Not everyone gets to go onstage and have a microphone in front of their mouth,” says Aiello, “so that’s a certain amount of responsibility. If you’re given the responsibility of having a microphone then you better say something pretty important. The pressure is to learn and listen to as much as we can so we can say the right thing and hopefully impact people.”