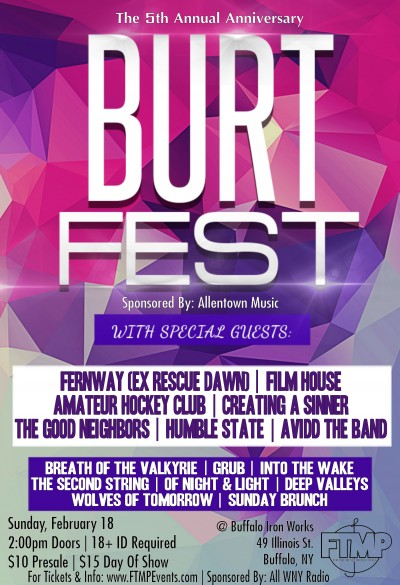 Fernway is the new alias of Buffalo's Pop/Indie Rock legends Rescue Dawn. After 5 years of cheers, they have just started kicking off their new project around the city. Fernway was created in mid 2017 by five incredibly different but some what respectively familiar music perspectives with each member contributing a special aspect to the bands aggressive yet smooth sound. From the ground shaking vocals, to the ripping guitars and heavy bass that is ultimately complemented by intense grooving drums. Don't miss these guys when they take the stage at Buffalo Iron Works for this year's BurtFest 2018!

Singer/Songwriter Derek Gregoire is a mainstay at our annual BurtFest events, and every year he would tell me "I wish I had a full band". That is, until this past year when Creating A Sinner started hitting stages all over Western New York! This wicked crew out of Gowanda is just trying to rock your socks off and have fun. Derek, Jason Meyers, Brian Walsh, & Devon Brodka bring together an infections blend of alternative rock that'll get you dancing or singing right along!

Formerly Improbable Cause, Film House brings Dominic Hannon, Aidan Krombach, Kyle Schnieder, & Drew Colosimo into a new realm of Alternative Rock. Their adventure has begun, and this one is sure to be a big one. With Dominic at the new helm of lead singer, he summons his inner front-man somewhere between the persona of Dave Grohl and those new pop alternative tracks on Alternative Buffalo. Get your ticket into the house, and see what these guys have put together for the world to enjoy!

Breath Of The Valkyrie : https://www.facebook.com/breathofthevalkyrie/

Breath of the Valkyrie (formerly Black Velvet) has been tearing up the local music scene since 2012. What started as a class project by a few college students turned into something more than great. Patrick Tierney, Jake Butcher, and Dakota Smith started playing music at NCCC as a class for credit. After graduating, they found Devon Brodka to slam the drums, and thus BV was formed. Metal driven instruments paired with a hard rock voice to bring it forward was hard to ignore. Winning multiple battle of the bands over the years, the crew has toughed it out to continue bringing us great music and a killer live show!

Out of Buffalo, NY the trio of Joseph Kinem, Nick Badeau, & Cameron Thibault are Of Night And Light. Crafting post-hardcore alt-rock spanning the space between ambient waves and thundering crashes, soft swells and heavy lows, the night and the light. With a hard DIY work ethic, this crew has amassed a solid following all over the East Coast. Even getting the attention of Vibe Up & AP Magazine for their new album after a successful crowd funding campaign. Get into the in-between, and check them out at this year's Burt Fest 2018!

Spontaneous moments and creative minds can produce amazing results. Deep Valleys (formerly The Casket Runaway) is a Christian Rock band based out of Buffalo, NY that has been gaining praise everywhere they go. The crew of Brian Naus, Nick Arnot, John DeJac, and Mike BonGiovanni are all veterans of the music scene who are now working together to create dynamic spirit-filled anthems. Deep Valleys shares equal inspiration of Pop Rock, resulting in catchy melodies, inspirational lyrics, as well as head banging instrumentals.

Grub is a Psych Rock group based out of Niagara Falls, NY swimming in Experimental Jams. Zach Tilton, Nik Woodcock, & Chris Brandon craft songs with blaring ambient guitars, melodic progressions, and groovy feels for your pleasure. These guys have been going at it for quite a few years under different names like Peaceco & FairLight before settling on the one & only Grub and have found a way to stand out of the crowd. You may point out that may be because Zach's guitar doesn't quite look right, but believe us when we tell you there's much more to Grub than an assortment of cool instruments!

Ever read something that changed your life? Amateur Hockey Club claims "This story won't be it. But, sometimes the greatest revelations can come from something as silly as a Laffy Taffy wrapper, or the back of a Molson Canadian bottle." Matt Foote, Brennan Carey, Nate Beyer, & Mitch Lariviere write songs about love, loneliness, faith, doubt, hopes and disappointments. They also strum guitars with strings, bang drums with sticks, and throw rocks at trains and it seems to be working for them so far.

More than Pop Punk, The Second String brings together years of experienced players into a pop foray of sweet soaring vocals and rocking compositions. They've quickly gained a following which has continued to grow even through some repair jobs. But every struggle the crew has been through has only made this instrument stronger than ever. With a solid line up comprised of David Andrzejewski, Roger Pleasent, Ryan Gelder, Robby Marshall, & Marc Del Priore they are back at it full force for 2018! Quality, love, and hard work are putting The Second String on the map so be sure to rock out with these guys as they are on their way up!

Avidd the Band has been rocking the Western New York music scene for quite a few years. With a base on Pop/Punk, Lexxi Himes' songwriting also hits into the realms of punky indie alternative & bedroom pop for a sweet mix of smiles. After many performances and even more band members, the band has finally settled into the trio of Alexandra Himes, Richard Miller, & Sal Durante who have an abundance of enthusiasm and motivation to keep the good music & good times coming!

Sunday Brunch - band is a brand new quality trio out of our dear city of Buffalo, NY. Steve Terry, Aaron Gordon, & Frank DiMaria create a pop version of punk rock that has that indie/alternative & emo edge that makes it seem familiar yet fun in it's own world. Hitting the scene with a deliciously friendly demeanor & spicy work ethic. The world ate up their debut EP "Eat Your Heart Out" and continue to be hungry for more seconds from Sunday Brunch!

What if your neighbors were an awesome Indie/Rock band? Like, a really good one! Well, as the name suggests, The Good Neighbors are who everyone should stop over and get to know! Connor Getz, David Delvalle, & Trevor Jennings combine smooth vocals over funky, fun tracks that cause their originals to wiggle their way right into your brain. And, they usually always toss in a song or two that you know and love along the way as well! So don't be shy, stop by & get to know your new neighbors!

Kodie Hertel and Mark Niewiemski like loud guitars, sweet rhythm, and bro-ing out. Together, they form the mighty Humble State, a vessel of music crafted from a blend of Indie/Rock and Emo/Punk. Started just last year in 2016, Kodie finally embraced his inner singer/songwriter into a full-fledged band! Now, this duo of cool cats has hit the music scene with a bang, and would love to be your new fantastic friends!

The Wolves Of Tomorrow : https://www.facebook.com/WolvesofTomorrow

The Wolves of Tomorrow (formerly The Black Hats) are a four-piece rock band from Western New York whose music is best described as lounge grunge spat out by Bob Dylan in a smoky room onto a roulette wheel of genres. Formed back in 2015 by Isaak Hyde, he was later joined in 2016 by the current line up of Jake Butcher, Devon Brodka, & Aaron Duffy who have brought his songwriting to the next level. With their new home base now firmly settled in Buffalo and its deeply rooted music scene, this four-piece act is preparing to take the currently gentle, reverb-laden, rock scene back and infuse it with something a bit closer to home.

Greg Priester, Mike "Fiki" Rakiecki, & Mike Magoffin are Into the Wake, an alternative rock band from Buffalo, NY. That's the simple way of saying it, but their songwriting isn't your typical "rock". These local veterans have released Their debut EP "We Are The Light" which grabs your emotions and holds you in a place of comfort. Let ITW bring you in to sing along and help understand what you're feeling. You are not alone, don't be afraid to open up.