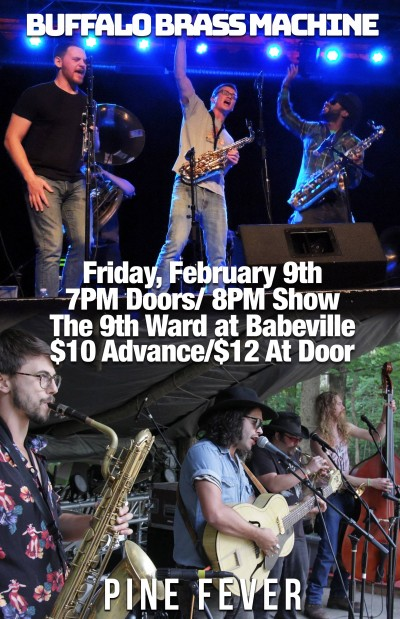 The Buffalo Brass Machine is an eight-member horn collective playing the likes of street brass, hip-hop, pop, and everything in-between. The band was formed in late 2015 by a group of University at Buffalo students gathered from across the state with the primary goal: to create and entertain.

The band started out firing on all cylinders early on, playing for large crowds in Saratoga and Buffalo. They rapidly became a fan favorite, playing at venues such as Mohawk Place, Buffalo Iron Works, and Canalside. The band has since played at venues in Toronto, Rochester, and Schenectady, and have their debut EP release scheduled for early 2017.

The camaraderie cultivated between these great friends making great music has helped push this group of barely-able-to-drink brass cats to the forefront, and that unity can be heard within their unique, refined sound. Make sure you swing by a stroll, busk, or show to see what they can do – and try to resist movin’ your feet!

Pine Fever makes a sound that harkens back to a distant past and play it so loud and so fast that they already hear it in the future. Call it old time, call it americana, call it jugband, or call it whatever you like– all you need to love it is a heart that beats. This is the kind of music that turns its listeners into the definition of euphoria, at least until the song ends. And for Pine Fever the song never ends.