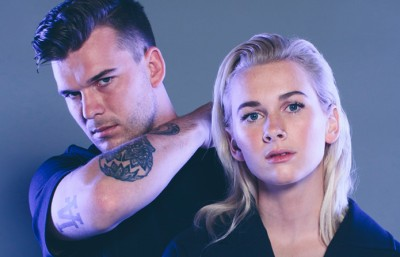 “It was very raw and emotional,” says Georgia Nott, referring to a rough draft of the BROODS single “Bridges,” which the singer wrote in her beachside hometown of Nelson, New Zealand. “We took it to the studio and created a song that’s a little more light-hearted, a little more of a release.” The beat-spliced ballad left a deep impression with the duo’s burgeoning fanbase, selling more than 400,000 digital copies since its February release and setting the tone for a self-titled EP, viral video (a high concept reflection of the heart-sinking hooks in “Never Gonna Change”), and sold-out shows in San Francisco, New York and L.A. While BROODS could have rode that initial wave out for the rest of the year, Georgia and her brother Caleb are already busy planning a spring tour and developing their debut album with GRAMMY-winning producer Joel Little (see also: Lorde’s Pure Heroine LP). “We’re still finding our own niche,” explains Caleb, “still experimenting.” “And since we know what we like,” adds Georgia, “the album’s going to be true to us—always developing, always evolving. When you stop evolving, you stop living.” That explains why the Nott’s left their last group (The Peasants) not long after it won New Zealand’s national Smokefreerockquest prize, a fierce competition that’s catapulted the careers of local artists like The Naked and Famous, Evermore and Ladyhawke. The way Caleb remembers it, everyone had different ideas of where that project should go, so he and Georgia embraced their electronic pop tendencies on their own. Before they knew it, BROODS “just kind of happened.” And since they’re not exactly strangers when it comes to collaborating—Georgia and Caleb won their first talent show way back in elementary school—working out parts like the manic melodies and ‘XX-esque’ interplay of “Pretty Thing” have only gotten easier with time. “We like the idea of writing without boundaries,” says Georgia, “Every time we go into the studio, it’s like, ‘This is what we should be doing.’ Music’s one of those things you have to figure out for yourself.”