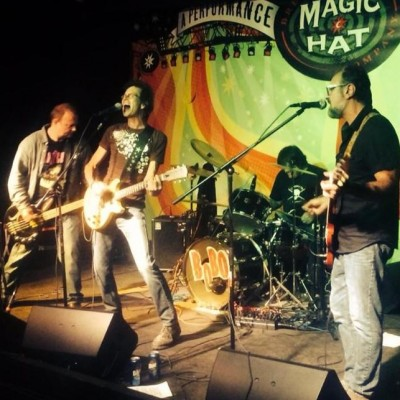 BoBo
Bobo earned a devoted local following thanks to the outrageous onstage antics of Jimmer Philips and his guitar-slinging cohort Frank Sterlace. On an off night, Bobo was a trainwreck: Songs stopped abruptly and obscenities were hurled, followed by fists. On a good night, they were a marvel of precision and vision. By the time of the group’s final incarnation, the rhythm section had learned to start the four count before Philips could start talking.

Luckily, Bobo had the musical muscle to back up its collective blabbermouth. Sterlace’s lead lines were gritty and uncompromising and Philips’ “could have been a contender” delivery detailed tales of loves lost and chances blown. While the band’s music was contagious, its reputation was notorious. Even the most sympathetic club owner could be wary of booking the group.

Bobo wasn’t the kind of group to get thrown around lightly. Likewise, they weren’t thrown on a lot of national shows as the “local support.” Still, that didn’t stop the band from appearing on a bill.

On occasion, Philips and Sterlace would grab an empty acoustic guitar case, fill it up with cheap beer, and head down to the nearest rock-and-roll club. Upon arrival they’d tell the doorman they were delivering a needed guitar to the opening band, then proceed to watch the show and polish of their stashed beverages with the promoter, local opener, and headliner all oblivious to their “guest appearance.”
-Mark Norris

B-Side Basterds
Formed in late 2010, the B-Side Basterds are a 7 piece ska outfit from Buffalo, NY. The band draws its roots from 1st and 2nd wave ska with west and east coast punk elements. Staying busy with shows in their hometown, the Basterds have also had the pleasure of doing shows in NYC, Clifton, New Jersey, Erie, PA, Pittsburg PA, Toronto, Ontario, Canada, Rochester, NY as well as Syracuse, NY. With more than an albums worth of material, The B-side Basterds entered the studios in January 2012 and put out their first EP with a second out in the winter of 2013 , which can be heard on their website as well as 91.3 WBNY. The band has been focusing their songwriting on more serious material while still venturing out to create a unique core SKA sound. With a planned tour over the summer to support their upcoming full length album, the band is prepared to make 2014 the year of The Basterds.