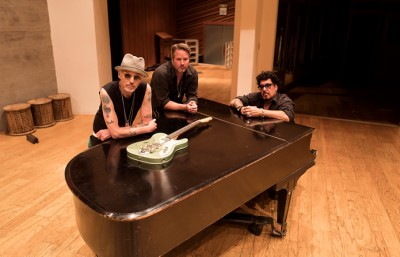 2017 & 2018 have seen The Boxmasters team up with legendary Engineer/Producer Geoff Emerick for an album that Geoff has called, “One of the most exciting projects I’ve worked on since The Beatles.”

Known for taking over the engineer’s chair on The Beatle’s albums “Revolver,” “Sergeant Pepper’s Lonely Heart’s Club Band” and more, Geoff added a familiar sonic touch to the sound of The Boxmasters, who have been unapologetic Beatles and British Invasion fans. His work on albums by Badfinger, The Zombies, America and Paul McCartney, among many others, have always been huge influences on The Boxmasters.

Sonically “Speck” touches on all of The Boxmaster’s influences, including The Beatles, The Byrds and Big Star but there are new sonic touches as well. Ukulele, Cardboard boxes and the Beatle’s famous “tea towels on the drums” trick pop up on songs throughout the album. “Geoff really did an amazing job on the mixing of this album and did it in a way that you recognize sounds you’ve known all of your life, but at that same time are in a new way. And I really loved being able to sit back and enjoy the mixes of an album instead of sweating every tiny detail of every song.” Says J.D. who typically mixes all of The Boxmaster’s material.

“Lyrically it deals with every thing from personal relationships to politics , social issues . The theme being that we are all specks in this universe trying to navigate it , during trying times in the world we still have our own loves, desires , problems and dreams as individuals.” Says Bud. “We’re just little humans. No matter what our standing is in society”.

The always prolific Bud, J.D. & Teddy have also been working on finishing another long awaited project titled “And Then We Drove” as well as contributing music to an upcoming independent feature film titled “Spare Room.” Songs for the followup companion to “Tea Surfing” have begun being written and recorded as well.

The Boxmaster’s 2018 “Speck Tour” kicks off July 6th in Yountville, CA at the Napa Valley Performing Arts Center and runs through the U.S. in July and August. After the West Coast, The Boxmasters make their way through Texas and then to the Northeast, where the band has rarely played before. Familiar venues such as Knucklehead’s in Kansas City, Boondocks in Springfield, Illinois, and Ram’s Head on Stage in Annapolis, Maryland are joined by new stops in Maine, Oklahoma and California.

Released three albums – “The Boxmasters,” “Modbilly,” “Christmas Cheer” on Vanguard Records
“Somewhere Down The Road” on 101 Ranch Records released April 2015
“Providence” was released in August of 2015 on www.theBoxmasters.com

“I’ll Give You a Ring” is featured in the film “The Winning Season” starring Sam Rockwell on Lionsgate Films
Contributed a version of “Little Boxes”, the theme song for the Showtime comedy “Weeds” second season

Venue performances include:
o Performed on The Grand Ole Opry in 2015
o Headliner at the Minnesota State Fair for 2 nights in August/September 2016 o Headliner at the Iowa State Fair in August 2016
o Co-Headlined with Marty Stuart at Ravinia Place in Chicago in 2016
o Tony LaRussa’s Animal Rescue Foundation’s Benefit in 2009 & 2011
o Hosting/Performing for The Country Music Hall of Fame’s “All For The Hall”

Ryman” in 2008 & 2009
o Billy Bob’s in Fort Worth, Texas, with ZZ Top as the opening act in 2009
o Opening act for Willie Nelson and Family and Ray Price tour 2009 & 2010
o Opened for The Steve Miller Band in Virginia Beach in 2015
o “Virtual Concert” at Michael Nesmith’s Video Ranch in 2009
o The Harley Davidson “Hog Rally” in Milwaukee in 2009
o BMI Showcase at The Sundance Music Festival in 2009
o Headlined the Washington Correspondent’s Jam in Washington, D.C. in 2017
o Performed over 300 feet below ground in the cave at The Bluegrass Underground in

Grammy Award-winning recording engineer whose credits include The Rolling Stones, Kanye West, The Pussycat Dolls, Will Kimbrough, Tommy Womack, Guy Clark, and more.
Mixer of Documentaries “Iron Will, A Veteran’s Battle with PTSD” (2016) and “It’s Not A Race: The Scooter Cannonball Run” (2015)

Co-founded The Boxmasters in 2007. Bud Thornton

Recently co-wrote the song “The Middle of Nowhere” with Tony Joe White on his album “Rain Crow.”