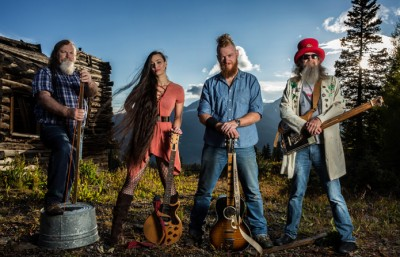 “I like the idea of saying something very complicated in a very simple way,” says Ben Miller, discussing the trio that bears his name. “That’s what we strive for musically, and what I strive for lyrically—to get directly to the point and save the flowery b.s. for the romantic poets. John Sargent, the painter, said ‘That which is not necessary is detrimental,’ and we try to live by that.”

On Any Way, Shape or Form, the Ben Miller Band channels a century’s worth of wide-ranging influences into 13 new songs that radiate with energy, smarts and soul. The result is music that’s wholly contemporary, while ringing with ages-old echoes of bluegrass, delta blues, Appalachian mountain music and more. A stew they lovingly call “ozark stomp.”

Miller writes roots-rocking barnburners (“The Outsider,” “Burning Building”), thoughtful ballads (“I Feel for You,” “Prettiest Girl”) and left-field departures (“23 Skidoo”) with melodic skill and lyrical insight, and the band elucidates them with urgency and eloquence. While those tunes show off Miller’s songwriting craftsmanship, a memorable workout on the traditional “The Cuckoo” underlines the band’s interpretive abilities.

The band’s use of offbeat instrumentation, however, shouldn’t be misunderstood as a gimmick. Instead, the three bandmates have mastered the technical challenges of their unconventional axes to produce a uniquely evocative ensemble sound that offers a compelling frame for Miller’s compositions.

“What I really care about is songs, and the rest of it is just a vehicle to get you to that destination,” Miller asserts, adding, “Just because we use junk to make music doesn’t mean we aren’t serious about it.”

“Our sound,” Dicharry notes, “is something that we never thought much about. It’s just something that kept growing without us really trying, and at some point we realized it sounded pretty cool.”

“The instruments that we use ,” Miller explains, “were originally born out of necessity, because we didn’t have any money. People would give us their old gear that didn’t work anymore, and we’d wire things together and try things out in different permutations and see where it led us. Through a lot of trial and error, we arrived at the set up that we’ve got now. Blazing your own trail through the jungle can take a lot of extra time and effort, but it gives you a chance to end up in a place that nobody’s been to before.”

That sense of musical adventure has long driven Miller and this bandmates from the start. Growing up in rural Curlew, Washington, Miller began playing guitar at 16, turning his back on a promising career as a visual artist to pursue his passion for music. He gained experience busking and performing in open mic nights while roadtripping around America, and during an extended stint in Eastern Europe.

Miller eventually found kindred spirits in bassist Scott Leeper, who’d been playing since the age of seven and had performed with his family’s band, in a duo with his brother, as a one-man country act and in a variety of blues combos; and Doug Dicharry, a musical omnivore and multi-instrumentalist, who can play nearly any instrument and has played in a wide array of projects from noise bands to ska and rock.

The three like-minded players joined forces, and soon their diligent touring regimen allowed them to conquer an ever-widening geographical base and win a loyal live audience. In 2012, the Ben Miller Band took its first tentative steps in the recording studio, resulting in the embryonic self-released CD Heavy Load, which attracted a good deal of fan praise and critical acclaim despite its humble origins.

The same maverick spirit that motivated the BMB’s early musical adventures came into play in the recording Any Way, Shape or Form, which they cut with seasoned producer Vance Powell, who’s renowned for his studio work with the likes of Jack White, Buddy Guy, Wanda Jackson, Willie Nelson and Kings of Leon.

“Our original plan,” Leeper notes, “was to scale it down a bit, and have it be even less produced than the first one. It came out sounding like us, which is all we really want.”

“It was the first time we’d really had a producer/engineer,” Dicharry notes, adding “It felt like we could finally breathe, because Vance was on top of things and got some really cool textures. We had a lot of confidence in him, so we were comfortable just going in and laying it down.”

“We wanted to keep it as live as possible,” Miller asserts, “so we recorded it live and did lots of takes,
on average around thirty takes before we felt we really nailed it down. That was important to us because we’ve been a live band for our whole career and we wanted that to come across in the recordings, that feeling of guys playing in a space together. We worked long days in the studio for about a month, just playing the songs over and over and working to push our performances and maintain the energy of what we do.”

With Any Way, Shape or Form encapsulating the Ben Miller Band’s salient qualities, the three intrepid bandmates are eager to hit the road and bring their new songs to live crowds around the nation and around the world.

“Our plan,” Leeper says, “is to just get out there and play for as many people as we can. That’s pretty much been our plan all along, and it’s worked for us so far.”

“The title Any Way, Shape or Form is sort of our way of saying that by any means necessary we will make the music that makes sense to us,” Miller explains. “That’s always been our attitude, and that’s how we’ve gotten to where we are and how we will get to where we are going.”