An Acoustic Evening with Breaking Solace & Of Night and Light
Wednesday 21st Mar, 2018 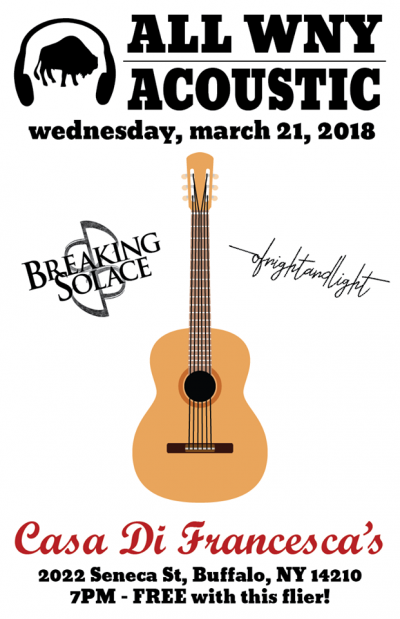 All WNYRadio Presents an Acoustic Evening w/ Breaking Solace & Of Night and Light.

Free Show with Flyer. Flyers are available at the venue and or from the bands.

Breaking Solace
Breaking Solace hit hard from the beginning with their first recorded hit single, "Thrown Away." After getting a lot of attention and radio air play, they then hit the stage with some of your favorite rock/metal bands such as Trapt and Trivium. Which was then followed by the release of the five song E.P. "Shatter the Silence" in April 2016. They have now begun to shake the foundations of the Central New York music scene with their second single, "Your Denial." With their high energy stage performance, strong work ethic, huge attention to detail, and an absolutely passionate fun loving and crazy outlook on music, Breaking Solace will be sure to rock their way into your heart and soul...

Of Night And Light
Inspired by the genre-bending styles of bands such as Thrice, Saosin, and Brand New, Buffalo's post-hardcore trio Of Night And Light combines dynamic vocals with delayed, rhythmic guitar chops, aggressive overdriven bass riffs, and eclectic drum fills to create a full-bodied sound that moves from the quiet, effect-laden swells of indie rock to heavy instrumentals and breakdowns more reminiscent of hardcore and metal. The band is noted for their high-energy performances with the use of multiple vocalists, guitar effects, lively percussion and bi-amped/octave bass providing the illusion of a second guitarist filling out the soundscape.

Their debut album Of Night And Light was independently released September 1, 2017, supported with the band's first tour through the northeastern US and backed by a successful crowdfunding campaign. The band is currently focusing their efforts on writing a follow-up EP to be released in the coming year and continues to perform shows throughout the United States.

Check out this Spotify playlist for the show and "follow" the bands:
https://open.spotify.com/user/ofnightandlight/playlist/4Idtfv1pvqP5yp3um41648?si=yGnsY7F3RUCdzbgNuHyMwA