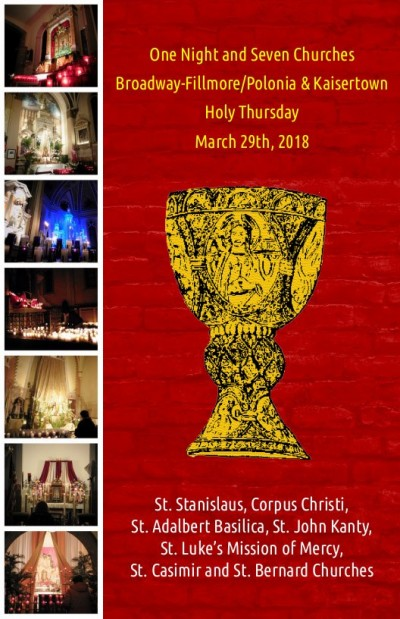 For the twelfth  year in a row on Holy Thursday, Broadway Fillmore Alive has put together a self-guided pilgrimage to seven historic churches in the Broadway-Fillmore/Polonia and Kaisertown areas partaking in the traditional visitation of the Blessed Sacrament in seven churches on this holy night.

The visitation period generally begins after Holy Thursday Mass (between 7:00-8:00 pm) and most of the churches remain open between 10pm and midnight.

In the first year, Broadway Fillmore Alive had about 50 requests for the pilgrimage info. The number of requests over the last few years has risen to over 2000.

The churches in Buffalo’s historic immigrant neighborhoods are awe inspiring and are deeply rooted in tradition. This is a way to experience their religious, artistic and cultural beauty while spending some time in prayer and reflection during this most sacred time of year on the Roman Catholic calendar.

Holy Thursday is on March 29th this year.