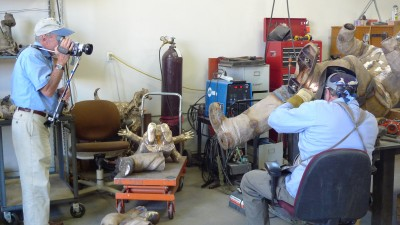 Izzy Bleckman:  On The Road, Behind the Lens

Featuring a screening of the documentary film, Risking Everything:  Stories of Niagara’s Freedom Seekers and the Making of a Monument

Film written and produced by Mary Roseberry and Izzy Bleckman

Multimedia event with legendary CBS ("On the Road") cameraman, Isadore "Izzy" Bleckman.  The program features archival news-story footage and the theatrical debut screening of the film Risking Everything:  Stories of Niagara’s Freedom Seekers and the Making of a Monument, a compelling documentary on Niagara's "Freedom Seekers". The half-hour film, co-directed and produced by the award-winning photographer Isadore Bleckman and his wife, Mary G. Roseberry, tells the story of African Americans making the dangerous journey from slave states to Canada and freedom before the American Civil War. Lewiston, Buffalo and Niagara Falls were among the last Underground Railroad “way stations” along the U.S.-Canada border. The film also documents every stage of the creation of Lewiston’s evocative “Freedom Crossing” monument by renowned bronze sculptor Susan Geissler of Youngstown, NY, and focuses on some individuals who settled along the Canadian shore after they found freedom, as remembered by their descendants.