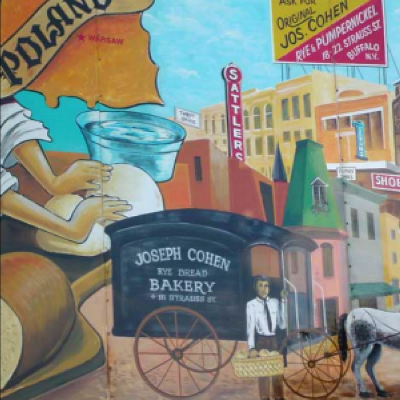 1 Symphony Circle BUFFALO, NY 14201
Time: 7:00 - 9:00pm
Cost: $10/general l FREE/Explorer Pass Holders
THIS EVENT HAS PASSED
- Share this page -
SESSION 3: City of Good Neighbors: Stories of Buffalo's Immigrants
German Immigrants in Buffalo & WNY
Presented By: Deb Hall-Stonish
Buffalo’s history is a story of immigrants. Among the first immigrants were people from the German “states”. In fact, individuals of German heritage comprise the largest immigrant group to settle in the United States as a whole. The nation of Germany as we know it was not established until the completion of the Franco-Prussian war around 1870. The talk covers early immigration prior to this period through the early part of the 20th century. It will also include information about the speaker’s family that came from what is now the Alsace region of France.
Polish & Italian Immigrants in Buffalo & WNY
Presented By: Mary Furlani
Polish and Italian immigrants to this region make up a large part of the fabric of the history of Buffalo. In this talk, the speaker will trace the immigration and settlement of these two ethnic groups in Buffalo through the lens of her own family, who came to this region in the early 1900s. Learn about how immigrants made their way to Buffalo, what the living and working conditions would have been like for them, and the impact they had on the Queen City.
More Information Find Prepaid Parking