Commemoration of the Fenian Invasion of 1866
Saturday 3rd Jun, 2017 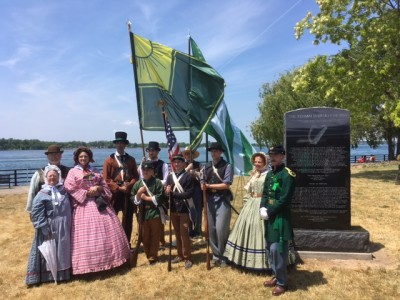 Foot of Hertel Avenue Buffalo, NY
Time: 11:30am
THIS EVENT HAS PASSED
- Share this page -

On Saturday, June 3, the Ancient Order of Hibernians will commemorate the 151th anniversary of Fenian Invasion.  The ceremony will commence at 11:30 a.m. at the Fenian monument at Tow Path Park (foot of Hertel Avenue) and will include a presentation by Bill Patterson, AOH-Niagara Falls Division Historian.

The Fenian Invasion was planned to ignite a conflict in Canada (at that time, known as British North America) which would occupy the British and set the stage for rebellion in Ireland.  In 1866, the historic Black Rock neighborhood was one departure point where more than 1,000 volunteers of the Fenian “Irish Republican Army” sought to invade British North America in an attempt to liberate Ireland from British rule. Not only did these efforts help inspire the cause for freedom within the Irish homeland, but this expedition also played a pivotal role in the subsequent confederation of Canada in 1867.

To help memorialize the Sixth Annual Fenian Invasion Commemoration, commemorative lapel pins will be available for purchase at $5.00 each.  All profits will benefit the Black Rock Historical Society.