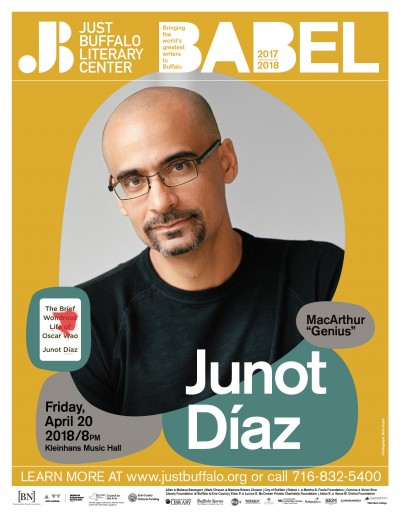 At 8:00pm on Friday, April 20th at Kleinhans Music Hall (3 Symphony Circle) Just Buffalo Literary Center’s acclaimed BABEL series concludes its best attended season ever with Junot Díaz, the author of The Brief Wondrous Life of Oscar Wao. Following custom, Just Buffalo Literary Center’s Artistic Director Barbara Cole will announce the upcoming 2018-19 season of BABEL. For those who have never seen the season announcement, it is somewhat akin to a political convention, as various fans react with applause and cheers as the next line-up is revealed.

Díaz is outspoken and entertaining as a speaker, moving from academic speech—he is a professor at MIT—to punctuating sentences with colorful language as the situation requires. His writing interrogates the idea of “Who is American?” and “What does the American experience look like now?” As an English-writing Pulitzer Prize winner, it may come as a surprise to some that Díaz found learning English one of the hardest experiences in his life. As he said in an interview in Asymptote, “Learning English for me was a miserable experience. I don’t know why it happened to me the way it did, but I found English to be enormously difficult, growing up in Central New Jersey surrounded primarily by English speakers. I had three other siblings who were learning English. They all acquired the language in a matter of months; in some ways it felt like it was overnight. But for me it turned into this brutal slog. Eventually the school approached my family, saying, This kid probably needs some sort of intervention. I got pulled into special ed and assigned all sorts of people to try to get me to speak English with any facility. But it took a while. It was torturous, man.”

The focus for Díaz’s visit will be his novel, The Brief Wondrous Life of Oscar Wao, which earned him a Pulitzer Prize, National Book Critics Circle Award, and was named TIME Magazine’s Best Book of the Year. More recently, critics named this bittersweet and laugh-out-loud funny portrait of a multigenerational family with its “mash-up of Dominican history, comics, sci-fi, [and] magic realism” “the best novel of the 21st century to date.”

The evening will provide a rare opportunity to meet the author, learn about his work, and ask him questions. After Díaz’s talk, there will be an audience-generated Q&A. Audience questions can be submitted prior to the event by email (submissions@justbuffalo.org) or at the event on index cards. Following the Q&A, the author will sign books. Talking Leaves Books, the official BABEL bookseller, has copies of Díaz’s books at their Elmwood location and will also sell books at Kleinhans the night of the event.