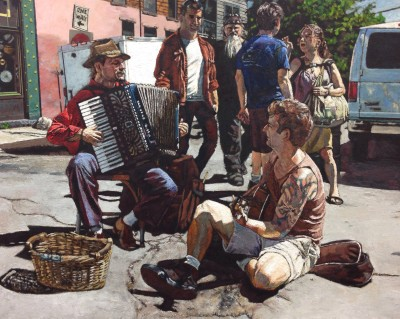 340 Delaware Avenue Buffalo, NY 14202 THIS EVENT HAS PASSED
- Share this page -
"A Musical Interlude" New Paintings by Gary L. Wolfe
Opening Reception:
Friday, May 1st, 2015
6-9pm
Live Performances from the members of Buffalo’s street musician community
Artwork on-view April 27th-May 29th
Gallery Hours: Monday-Friday
9am-4pm
Artists Statement
In this group of paintings, I wished to continue to explore the use of oil and encaustic on tarpaper in representing individuals and groups of figures within their environments.
The subjects in these works are people from the streets, primarily buskers (musicians who perform on the street for voluntary donations).  Included in each musician’s portrait are passers-by who do or do not give their attention (and dollars) to the buskers’ art.   There are also among these works, street scenes suggesting an informal inter-play, or interlude, between individuals in other venues; outside a bar, among street vendors, in a backyard, etc..
As I worked on this series, I became interested in how each individual figure seems to be absorbed within their own psychic space, even as they are among others.   The musicians are immersed in the execution of their art, regardless of response.  Others are engaged in conversation, occupied in making a point, absorbed with their own thoughts or focused on some goal.   As viewers, we observe them in a momentary interlude in an ongoing narrative.
Find Prepaid Parking