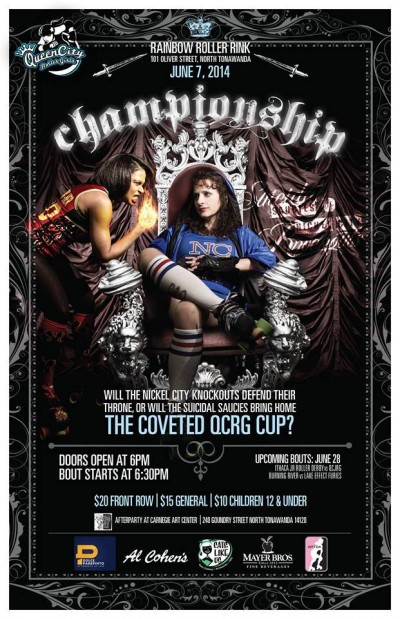 With all the hoopla surrounding Buffalo's football and hockey seasons despite not having fielded a bona fide winner in far too long, it's easy to forget our city has more than just the Bills and Sabres to satisfy its lust for sports victory. We have Bisons baseball, Bandits lacrosse, and even FC Buffalo soccer all calling downtown home. But there's another league you may have missed—possibly due to their residing in suburban North Tonawanda or maybe because they don't play the kind of sport you see regularly on ESPN's "SportsCenter". Either way, if you live in the city and don't know who the Queen City Roller Girls are yet, you will very soon.

Roller Derby has been around as a contact sport since the mid-1930s and hit broadcast TV as early as 1948 in New York. A few different iterations came and died until a permanent revival during the early 2000s by amateur, self-organized, and all-female leagues as a way to promote competition and sportsmanship through athletics and self-expression. It was this concept shining through the 2006 A&E series "Rollergirls" that sparked Buffalonians Flotorious and Sissy Fit to find like-minded individuals here in Western New York for a go. In just three short years the league grew to include its current staple of four teams with regularly sold out bouts and in 2010 their charter team The Lake Effect Furies become a full member of the Women's Flat Track Derby Association (WFTDA).

It took me until 2008 to finally catch one of these exhilarating matches at NTs Rainbow Roller Rink. By then the QCRG were gracing the cover of Buffalo Spree at home and national roller derby excitement was spilling over into pop culture with Drew Barrymore's independent dramedy Whip It starring Ellen Page. I had a blast watching The Suicidal Saucies take on The Nickel City Knockouts (the Alley Kats and Devil Dollies complete the quartet)—enough to make sure and bring a group of friends to a game the following season. Since then it seems the appeal has only increased through social media awareness, the volunteer athletes' unparalleled work with the community, and frankly for consistently providing a raucously fun night on the town.

Well, that "town" is soon to be changing names as the completion of Buffalo Riverworks Event Center's adaptive reuse of the former GLF grain elevator at 333 Ganson Street along the waterfront ushers in a new chapter for the QCRG's ninth season. This project is a mammoth undertaking with outdoor hockey rinks already opened last winter for The Labatt Blue Pond Hockey Tournament, a home for the newly minted Buffalo Curling Club (sweeeeeep!!), a brewery, multiple restaurants and bars, areas for outdoor recreation, a concert venue, a banquet hall, and of course the 98' x 66' custom indoor flat track made of concrete rather than the hardwood QCRG's players have come to know.

“Moving the team to the Buffalo RiverWorks location will allow us to expand our fan base and expose more people to this rapidly growing sport. Our fans love the hard-hitting excitement and athleticism that is today’s roller derby.” - Jason Isla, Chairperson of the Board for QCRG.

Comprised of athletes known by their alter-egos to teammates and fans alike—names like B'kini Whacks, Shank Ya Very Much, Marci Beaucoup, and Abercrombie & Fists—the atmosphere at a bout is unlike any other sporting event Buffalo has to offer. There's live music at intermission, a steady stream of joke commentary from announcers quick to infuse their own unique personalities into the game, and a whole lot of checking by "blockers" doing their legal worst (elbowing is a penalty) to prevent the "jammer" from circling through the carnage for points. The rules will take a little getting used to and I do recommend checking out the league's website for specifics via "Roller Derby 101", but the electricity inside the arena will keep you on the edge of your seat even if you're slow on the math.

All jokes, satirical player names, and loud noise aside, though, everything you see at a match is one hundred percent real. Nothing is scripted—these women are playing for the love of the game and in fact pay out-of-pocket for most practice time and equipment in order for all profits to go back into the league and community. Tempers can get heated and competiveness is always fierce but as the QCRG states online "Bouts ARE kid friendly if your kids are allowed to see full contact sports, women in short shorts, and hear an occasional 'PG-13' joke." Fighting is not allowed and illegal hits are met with punishment during gameplay, so don't worry about keeping your head on a swivel in case bodies come flying over the boards a la WWE.

"We are all so excited to be a part of the amazing complex being built at Riverworks and it will be great to share roller derby with new fans. Modern roller derby is awesome to watch and provides a great opportunity for post-collegiate female athletes to participate in a full contact sport within an amazing community." - Stephanie Godleski aka Toxic Shocker, Alley Kats skater

And those fans are die-hard, in full knowledge of what's happening, and anything but quiet. They cheer on their favorite players, mock the referees, and boo anytime the score isn't going their team's way. It's hard not to get caught up in the rush along with them especially after seeing how interactive and in the moment the athletes are too. You'll see them talking and laughing with each other before every "jam", letting any and all trepidation you may have of ladies in fishnets covered with tattoos and piercings to melt away. Almost every one of them has a hockey player's fire paired with a complete disregard for pain threshold while on the track and a similar respect for sportsmanship, the game, and fans afterwards.

If any of this sounds fun, interesting, or simply worth a look: do it. The current season is almost over, but you still have an opportunity to experience this one-of-a-kind event on June 7th at Rainbow Roller Rink in North Tonawanda (101 Oliver Street) for the 2014 championship between those same two teams I saw compete my first time out. The Knockouts have been undefeated for three straight seasons so the momentum is definitely on their side. But how great would it be to witness a monumental upset from the Saucies in the last regular season game ever at the QCRG's original home?

General admission tickets are just $15 online, from a player, at the venue, or at Terrapin Station with front row tickets charging a premium of $5 more only via www.qcrg.net. Doors may not open until 6:00pm for the 6:30pm start time, but the festivities start earlier at the Carnegie Art Center (240 Goundry Street). At 3:00pm you can check out street art exhibit cOllide-a-scOpe and grab some BBQ during a parade for the QCRG Cup. And if you don't want the night to end, come back after the match for a fire show.

It's the perfect event to wet your feet whether you live in the suburbs or in the city. The former will catch the fever and hopefully follow the team downtown next year to not only catch the new season but also check out the gorgeous, ongoing improvements to the waterfront while the latter will get prepared for what's soon to be unfolding in their backyard.