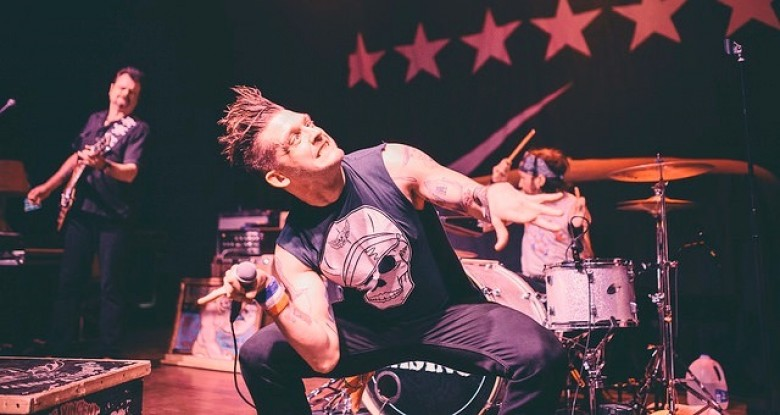 Michael Wayne Atha, better known by his stage name Yelawolf, is a southern born rap, hip-hop, country, blues artist. Identifying his sound can be confusing as the artist doesn’t conform to the limitations of any single genre. Touring in support of his latest album Love Story, Yelawolf played in front of the Town Ballroom.

Opening was the Nashville group, Hillbilly Casino. A pummeling blend of fast guitar licks, double kick drums, and slap happy stand up bass. The group also incorporated some surprisingly sweet 3 part harmonies. The band's inspiration clearly drew equally from archives of old folk songs as well aggressive punk. The small group got a huge reaction from the crowd, about as good of an opener as a headliner could hope for. By the time Hillbilly Casino left the stage, those in attendance were buzzing.

Yelawolf took to the stage flanked by bass and guitarist with his DJ standing in his booth fashioned after the front of a classic car. Covered in tattoos, wearing his wide brimmed cowboy hat and snake skin boots, the frontman began his set with “Outer Space” the funky, opening track from his latest album. The song appropriately set the scene for the rest of the show and gave context to Yelawolf’s self perception.

Staring into the crowd wearing his aviator style sunglasses, the Alabama rapper smirked and observed the crowd before continuing through the setlist. Playing songs such as “Box Chevy V,” “Trunk Muzic,” “Whiskey in the Bottle,” etc. Yelawolf always maintained a relatively calm demeanor.

Yelawolf provides a unique twist on a combination of genres that rarely mesh and with a setlist of twenty-some songs ranging across the musical spectrum, it was a great show for all in attendance.