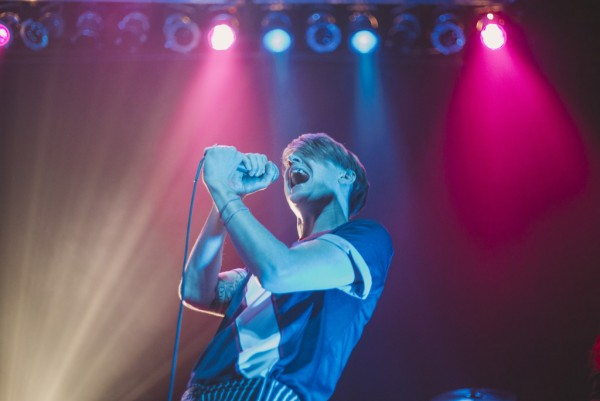 Let me elaborate on that title. I know that Foxy Shazam has not seen any significant lineup changes recently.

Eric Nally is still the charismatic lead vocalist, Alex Nauth is still the backup vocalist and trumpeter, and Schuyler Vaughn White is still the crazy keyboardist with a terrific name.

The rest of the band has been relatively consistent. So why call Foxy Shazam “new?” This tour, the Gonzo Tour, is in support of their new album, Gonzo (or Gon5o – available for free download) the fifth studio album from the band; this album is nothing like the last four.

Foxy Shazam play a special brand of moderately ironic glam-punk. They have regularly released infectious, over the top hits with soaring melodies, anthemic instrumentals, and wittily hilarious lyricism. But Gonzo is a little different, more subdued and almost, indie rock. Whatever the difference on their albums, the dichotomy between the old and new Foxy Shazam was apparent and actually reinforced by the band during the show.

The performance was split into two separate shows. The first half featured dark blue and purple lights and a more restrained Nally. Wearing a USA soccer jersey, the newly blonde vocalist led the group through the 9 tracks of Gonzo, start to finish. The crowd was understandably less familiar with the new songs though many of the choruses still featured some strong sing-along moments. At completion of the 9 tracks Nally stated that they would be right back after they changed their clothes. After a 5 minute break, the band re-took the stage. Apparently, changing one’s clothes mostly meant taking off one’s shirt. With a more “punk” look, the band jumped into “Bombs Away,” the opening track of their 2010 release. The next 10 songs featured a much more aggressive sound and performance from the group and a more involved reaction from the crowd. The song “Killin’ It” had the entire crowd jumping in unison to the chorus while the song “I Like It” presented a room full of people yelling “I like it” along with the modern rock anthem.

While Foxy Shazam may have substantially changed their sound, Larry and His Flask have made no such adjustments. Their style of bluegrass/folk punk has remained consistent and bullish since their start in 2003.  Opening in support of Foxy, the 5 man group began the night with a tune from their newest release By the Lamp, “Home of the Slave.” With quick riffs from guitarist Ian Cook and Banjoist Andrew Carew, the breakneck speed was reinforced by Dallin Bulkley on guitar, and the founding members and brothers Jeshua and Jamin Marshall on the Double Bass and Drums.  With all 5 members contributing vocals behind Ian’s lead, the group asserted their presence as a band ready to have a good time. The 11 song set list was over within what felt like seconds.

With Larry and His Flask being the same band as always and Foxy Shazam in the middle of a bit of a transformation, it was an entertaining night for all involved. Let’s hope both groups return to Buffalo for another night of glam and folk punk.