Matisyahu with Radical Something At Town Ballroom 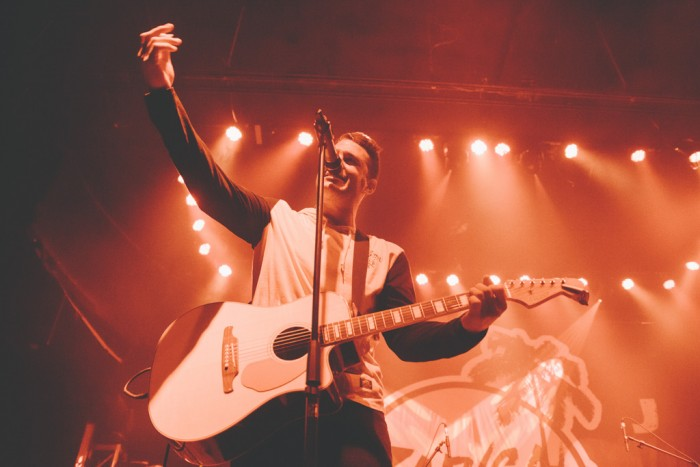 Radical Something
- Share this page -
View complete Photo Gallery
Longtime fans of Matisyahu have seen this artist go through a transformation. At the time of his debut release, Shake Off the Dust… Arise in 2004, the Jewish musician was known for his adherence to Hasidic Jewish tradition both in dress and lyrics. In 2011, Matisyahu shaved his beard and stopped wearing his kippah. Many Jews denounced this new Matisyahu. To the secular world however, it was seen as little more than a dramatic fashion change. This shift in appearance carried over into his lyricism as the orthodox focus broadened into a more general view of spirituality and life.
Opening for Matisyahu was Radical Something, a Californian hip-hop rock group intent on having a good time. Songs such as “Cheap Drink,” “Be Easy,” and “California” received applause from the increasingly energized crowd.
Matisyahu’s backing band (Dub Trio) took to the stage amidst ambient colored lights and a thick wall of smoke. The instrumentalists began with “Star On the Rise” an atmosphere heavy slow song from their newest album Akeda. The music expanded for some time before vocals began to emerge from the dark behind the stage.
Lace 'em up, shadow boxing in the basement, speed bag
Time to land the spaceship
Heavy hitter, duckin' punches, fightin' the enemy
Who is the enemy? Can I survive me?
Matisyahu continued singing as he took to the stage, briefly acknowledging the crowd before dropping his head, closing his eyes, and continuing with the song. The following song, “Black Heart” was another new song with more defined Reggae influence while still maintaining the same atmospheric touch. It wasn’t until “King Without a Crown,” the third song of the set, that the crowd came alive. Dancing and swaying to a beloved tune. The early portion of the concert heavily favored songs from Matisyahu’s Akeda which was released in June of 2014. One highlight was the performance of the new single, “Champion.” The immediately catchy and hook driven chorus got the whole room moving in rhythm with the thundering bass drums.
At the end of the set, Matisyahu closed with three back to back songs from his 2006 Youth album (“Indestructible,” “Youth,” and “Time of Your Song”) before an encore performance of his 2009 single, “One Day.”
- Share this page -