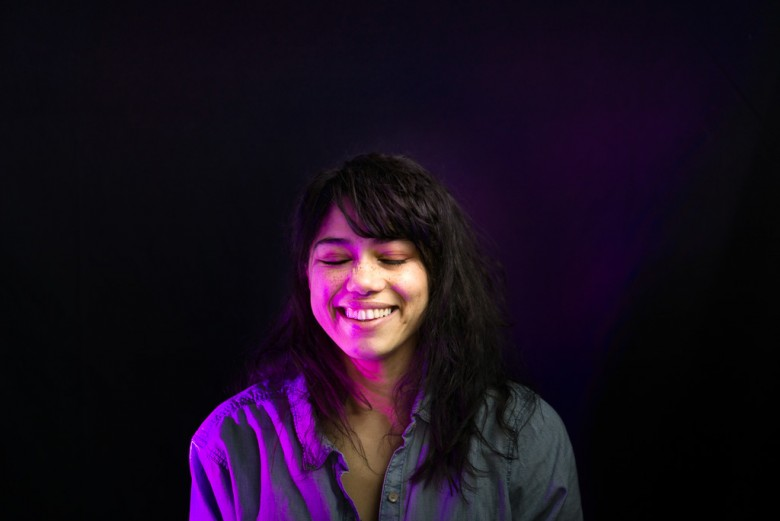 Hop Hop is no rabbit in a hat. Jazmine Frazier, the woman behind the moniker, is more akin to a magician who pulls from the past to create the future, and this is evident in both her sound and in her personal philosophies. The best part: she does it in ways you would least expect, which you’ll soon discover as she gets in-depth about her new tracks. But first I’d like you to get acquainted with the magic behind the music.

The 27-year-old rapper/singer/producer molds sounds into whatever she needs them to be, creating melodies that are satisfying to the ear but also full of intent and purpose. She’s come a long way, both musically and geographically. Frazier grew up in Alabama and Florida, and while she always dreamed of making music, she had a bit of a struggle finding her way. Her mom wanted her to join the church choir and her dad wanted to turn her and her sisters into the next Jackson 5. It wasn’t until she moved to Buffalo that she was able to truly nurture her musical talents and break free of expectations. “The whole music scene just opened up to me in Buffalo,” she says. “There wasn’t any such thing in Alabama or Florida where I was from. I did not have support down there, but Buffalo is super accepting.”

Naturally, she would be welcomed. The woman is a musical shapeshifter who effortlessly bounces from hip-hop to alternative to “funk-punk,” a genre she’s designated to Mallwalkers, one of the several bands she has been recruited to and that she still rocks out with in live shows.

Being versatile enough to go from solo-star to band member and back again takes a special set of skills and talent, but Frazier takes it all in stride. After all, it’s not only what she does professionally, but it’s who she is personally. “It’s always something fun to do between the different projects,” she explains. “I like being able to juggle between being the leader in my own solo thing and kind of just being a gear in the machine is kind of fun to me...someone else just make the decisions, I’ll just be there to shake my head and scream and spit on people. Hey, just tell me what to do.”

Her latest offering is her fourth solo project, Scratch, a five-track EP that explores her life and triumphs. The bouncing beats and snappy lyrics may not immediately bring the word ‘intimate’ to mind, but each song tells a story that allows Jazmine’s listeners to peer into her world. “I’ve got a different M.O. for every song,” she says. “I never want to pigeonhole who Hop Hop is because Hop Hop is kind of like a reflection of who I, Jazmine, am, and I’m all over the place.” While the themes and melodies of Scratch are indeed diverse, the tracks work together to make the entire project clean and cohesive, thanks to the magic of mastering courtesy of John Bohn and top-notch production from Hop Hop and her “partner in life [and] in crime” Brandon Schlia, who runs the label Steak & Cake Records.

This EP embodies the evolution of Hop Hop, and she attributes her success to conquering self-doubt and uncertainty, and using her experiences as an example. There’s one thing she wants everyone to know (and to do): Just try. “If you didn’t try, you just never would’ve known how awesome it is when you do something that you were so afraid to do, and you find out that you kicked ass.”

Without further ado, discover the stories behind Scratch as Hop Hop reveals the inspirations and influences behind each track.

Spoonin’ seeps in with fuzzy pulsating notes that serve as the foundation of the track and lay just beneath Frazier’s voice. In fact, the sounds that bring in this song are the product of brilliant sampling, sound manipulation, and an uncanny ability to birth three-dimensional sound from two-dimensional visuals. In other words, if this opening track sounds animated, it’s because it samples the song Spooning in a Spoon from a 1935 Humpty Dumpty cartoon that Hop Hop’s great-grandfather gave to her on VHS when she was a child. “That song [is] really close to me because my great-grandfather was so awesome and was really sweet and supportive to our family,” she explains. “So I was like, oh, this reminds me of Pop!”

The meditative and mystical feel of this track is also quite intentional. In terms of lyrical content, Frazier says she was inspired to write after an evening at her neighbors’ house. “I was in the meditation room and they [were] spreading lavender essential oil and I was like, I am so chillin’ right now,” she says, “and I was just writing, 'Saturday, play all day, ain’t gotta work, I’ll drift away, sailing away, spirited away,' and so I was just going on, so ‘Spoonin’ was just about the awesome time that I had; just hanging out and feeling good.”

Scratch draws inspiration from the past yet again with its second track, this time using a sample from Judy Garland’s rendition of I Don’t Care in the 1949 film In the Good Old Summertime. The song was sent to Frazier by her friend, a wild-child turned council member and mother who uses Garland’s words as something of a personal mantra. “She shared that because she feels, [that] she’s some sort of authority figure in her community or something she needs to be prim and poised all the time,” she said of her friend. “She’s like, ‘When so and so says they want a report on Friday, I’m like, I don’t care!’ I was like, Oh, my God, I am so feeling that.”

Frazier also reveals that the song was inspired by a job from which she was fired for defending herself after being treated poorly, which she believes was largely based on her gender. “I also demand respect for myself in the workplace, because historically women are treated like they ain’t shit,” she says. “I work just as hard as this dude over here; why does he get paid more than me? Why do you help him more? Why do you give him more slack when I know that I’m working the hardest I can with the resources that I have and I’m not being respected or valued?” Despite the circumstances, Frazier was able to walk away with her head held high and inspiration for a rebel anthem. “I did what I needed to do to feel good about myself and honor myself, and I don’t care,” she says.

Scratch is arguably the most organic track, not only for its reflection of Hop Hop’s authenticity but also because it was the only track built from scratch with no samples, hence its title. It serves as the ‘about me’ section of the EP, where listeners can get an overview of who Hop Hop is and what she’s trying to get across. It’s also a protest of the mainstream image of ‘female rapper’ that the music industry pumps through radio waves and exploits through music videos and social media pursuits.

“As a woman, as a person of color, as a hip-hop artist, I feel like there’s this box that people want to put you in,” she laments. “They basically will try to compare you to any other hip-hop artist they’ve ever heard, or the fact that I’m a woman at all and I rap, they’re like, what? These people, they’ve just got certain expectations they put on me and I’m really just over it.” The title track, Frazier explains, is an expression of being true to self and embracing all that she is. “I’m 27, and just in the past couple of years, I’m really just starting to shed people’s expectations of me and it feels really good to just sit inside of myself and to say, what do I want? What do I care about? I don’t care about what anyone else thinks, except what feels good to me.”

Unquestionably Scratch’s most laidback cut, Sandman is an equal mix of chill and melancholy, a broody tune that one could easily get lost in after a long week or a disappointing day. Frazier says it’s the first song she put together for the EP, and its backstory involves a venture that never got the chance to take root. “It was last year, springtime, and you know, that’s when you get your garden together and you start sowing some seeds…and so I was really excited about my seedlings because I had big plans.” Unfortunately, the greenhouse in which she started her seedlings blew over, turning her meticulously organized and labeled starter garden into a mosh pit of soil and seeds.

She explains that her motivation for writing often comes from needing a creative outlet to vent, and while she voices her frustrations, she doesn’t wallow in them, neither in song nor in life. “Sometimes you gotta feel bad about yourself before you can feel good about yourself again,” she says. “Even if I know I’m being excessive, just let me run my course because I know I’m gonna get tired of myself being all sad and that’s when I’ll be like, whatever, it’s a beautiful day. I have to get as low as I can go and then I’m like, ew, stop crying. I get tired of myself.”

The fifth and final track is a somber and contemplative piece that embodies the diverse facets of the grieving process. Frazier reveals that the title contains the initials of her older sister, who passed away 13 years ago. As Jazmine nears the age of her sister when she died (she was 28), she reflects on memories, pulling from mental compartments in an attempt to distinguish what was. She explains how the song balances honoring the memory of her sister with exploring concepts related to mourning and communication beyond mortality. “It’s just really interesting to think about where people go when they die,” she notes. “I choose to believe that she is where she needs to be. I don’t know what that means but I try to be open [to] all ideas of spirituality; she’s around someplace, so I just try to talk to her sometimes and it feels good.”

Hop Hop is a girl on the go and you’ll want to follow her every move. Be sure to catch her at Flying Bison Brewery on August 01, 5:30-8:30pm where she’ll be performing a benefit show for Friends of Night People, a local organization dedicated to helping homeless and underprivileged communities in the city. And if you haven’t heard Scratch yet, what are you waiting for?! Listen below and buy your own copy through her Bandcamp page.