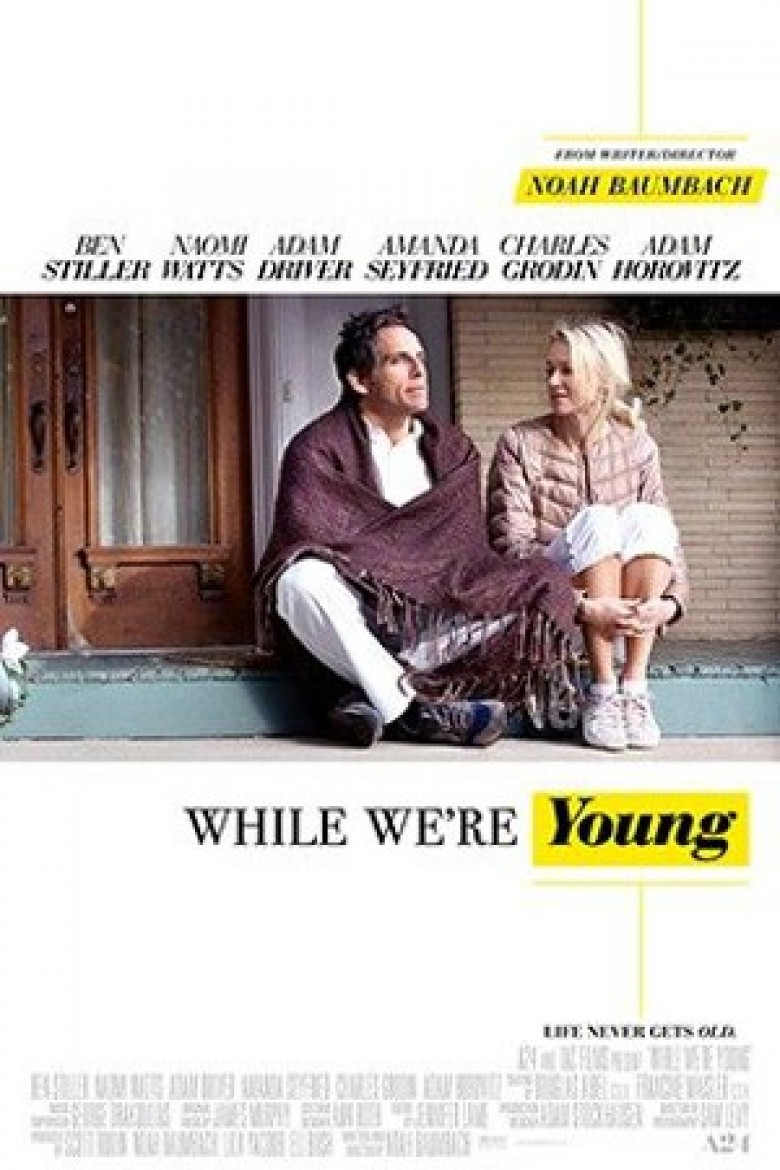 I hated While We’re Young—a fact that actually increases my already healthy dose of respect for writer/director Noah Baumbach. He’s a filmmaker with the type of style, tone, and air of not quite tongue-in-cheek pretension you could pick out from across the room as his and his alone. Sometimes it’s good (Greenberg) or downright perfection (The Squid and the Whale and Frances Ha). Other times it makes me so mad I could scream (Margot at the Wedding). Here’s the thing, though: they all force me to form a strong opinion. Vitriol, elation, it doesn’t matter because I walk out of the theater with unbridled thoughts. That to me is an artistic achievement.While We’re Young is my least favorite of his work and I’m giving it a bad score, but I don’t regret the experience.

There’s only one way I could accept anyone feeling differently. If someone watched and came out thinking it was this grand meta narrative commenting on itself via the actions of its make believe filmmakers onscreen, I’d say okay. I wouldn’t agree with them, but I’d appreciate their viewpoint. I too wanted to see it under that light, especially in response to lines like Ben Stiller‘s Josh telling Adam Driver‘s Jamie that his documentary was an interesting idea but lacking a real point. Every time I tried to see While We’re Young‘s satire as smart I only ended up noticing surface polish possessing little beneath. Baumbach had a cool idea about a forty-something couple that starts hanging out with a hip, twenty-something millennial version of themselves, but his orchestration falls way short of being enlightening or entertaining.

It started good. There was a broad sense of situational comedy at the beginning that felt authentic in its depiction of Josh and Cornelia’s (Naomi Watts) middle-aged doldrums isolating them from friends who now have babies and each other distracted by work while Jamie and Darby’s (Amanda Seyfried) bohemian lifestyle full of spontaneity and charisma keeps them fed and happy without ever having to lift a finger. When they meet it is pure Baumbach gold. The way the youngsters overplay their charm is the perfect contrast to Stiller eating up every morsel of praise—horrible people massaging horrible people’s egos in order to be more horrible in their own right. Montaging their day-to-day and accentuating the reversal of youth being retro and adult being “in-touch” was a bit much, but the concept was inspired.

Sadly, the whole endeavor derails instantly once the plot is introduced. Suffice it to say, the film is about a new generation of entitled brats usurping the old one via a path with much less resistance. As Josh would say, “It’s about America.” We’re meant to idolize Jamie and Darby as these carefree wunderkinds engaged in a lifestyle without worry—twenty-first century hippies slick enough to feign friendship and comradery so they never have to pay for meals, conjure an original thought, or give credit where credit is due. They live a way that jealous Baby Boomers only fantasize. And these arthritic counterparts spouting “back in my day” comments and driving “we knew what hard work was” to an early grave? They do and say anything to undermine the new order, stubbornly rejecting the world’s evolutionary leap forward.

One could say Baumbach’s thesis centers on our current era of reality TV, YouTube ubiquity, and death of the artist, packaging it all in what attempts to be a wryly cynical farce throwing barbs of clarity amidst humorous circumstances. He just tells it with such a smugly straight face that I wanted to punch every character in the nose and walk out. I got so angry at Baumbach’s brazenness to not even try to hide his obviously personal thoughts on truth in cinema and the fine line between artistic license and fraud getting thinner by the minute. I felt preached at despite the package pretending to be a fictional narrative and not a lecture. It looks like a film and tastes like a film, but as soon as it reached my stomach it turned sour.

Baumbach has often been accused of creating work mired in a too-inside look at the privileged life he’s lived. While I don’t disagree with the sentiment, I’ve always found he counters that aesthetic with an everyman sense of humor allowing us to laugh at it. There are a couple big laughs here that I couldn’t suppress if I tried thanks to speedy line deliveries and wonderful rapport between actors, but the result was more Baumbach laughing at us. He has made his characters so abhorrently self-centered that even their genuine attempts at generosity feel faked. I never once believed any had a shred of honor so my mind continuously searched to guess the latest ulterior motive about to be introduced. Even Josh’s grand plan to heroically save cinematic integrity is built upon petty envy.

The periphery players like gung-ho new parents Marina (Maria Dizzia) and Fletcher (Adam Horovitz) are brilliantly obnoxious—we must hate them to want Josh and Cornelia to ditch them for Jamie and Darby—but so obviously pawns to manipulate. I loved Charles Grodin‘s deadpan Leslie Breitbart’s ability to exude compassion through an air of superiority, Matthew Maher‘s Tim being the epitome of nice guy with too much faith and even more indifference, and Brady Corbet‘s Kent arriving with nice emotional drama. But none exist as more than pieces in a game meant to open an audience’s eyes to the reality that we all get old. Seriously? We need a movie to tell us that in 2015? There’s might be a worthwhile message buried somewhere inside this thing, but all I see is a self-righteous inside joke.