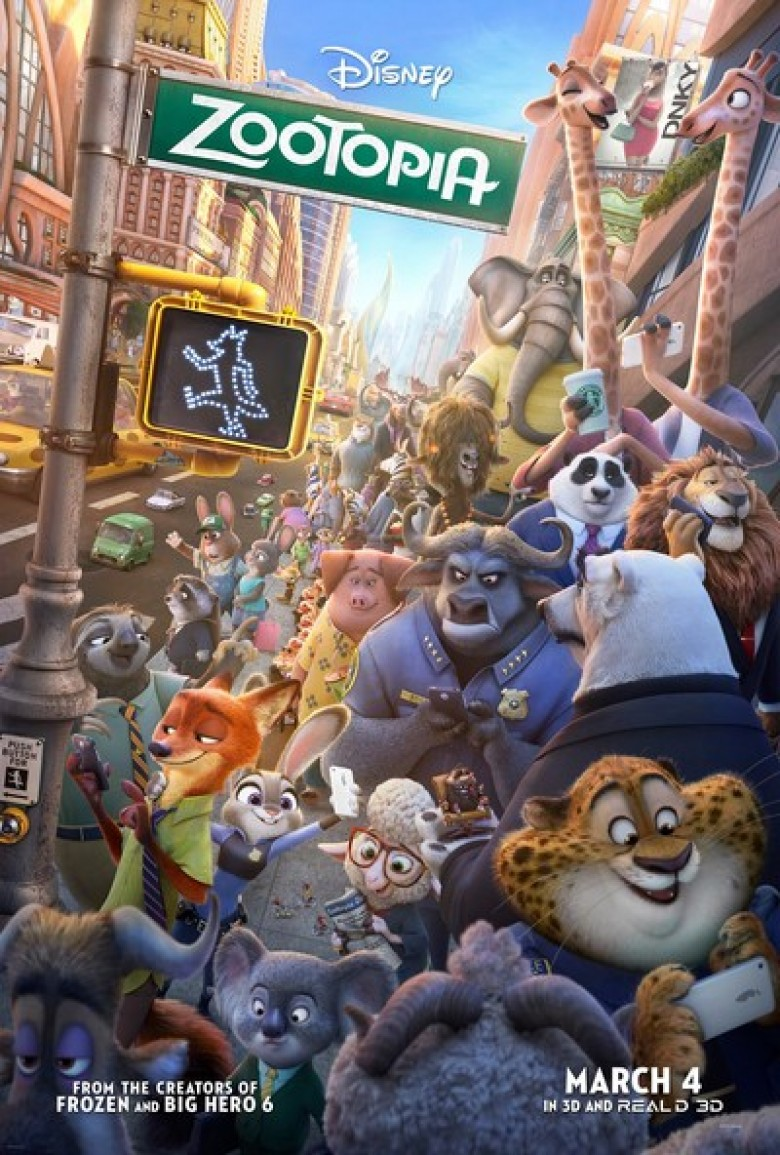 “Where anyone can be anything”

In the tradition of Happy Feet (climate change) and Monsters University(fraternity life), Disney’s Zootopia has transposed adult themes onto PG-rated family fare again. Whereas those previous two were misguided—the former shoving a political agenda down kids’ throats without warning and the latter proving a weird stamp of approval on questionable activities we hope our children will show moderation towards—this one’s worthy cause of harmony and inclusivity is age-appropriate and universal. It takes a hard left into #BlackLivesMatter jurisdiction with blatantly satirical comments confusing youngsters and slapping parents in the face, but the wholesome, worthwhile message underneath remains intact: we can be whoever we want regardless of stereotype, race, gender, or size. The Mouse House simply pulls no punches explaining its obstacles through a contemporary lens.

Whether you want your children exposed to racism as it is portrayed is up to you. The notion of a “prey” bunny fearing a “predator” fox will be just that to them (depending on age or real world experience) while the unavoidable comparison to white police officer and black perpetrator screams out to adults in the context of these characters’ occupations and vocabulary. It’s not a harmless bit of dialogue by any means when the bunny Judy Hopps (Ginnifer Goodwin) starts to tell the fox Nick Wilde (Jason Bateman) that he “isn’t like those other foxes” because he’s “a good father and articulate”. Kids will see it as a father striving to buy his son a popsicle, the word “articulate” going over their heads; parents as scathing commentary.

What’s interesting about Jared Bush (also co-director) and Phil Johnston‘s screenplay is that they don’t sprinkle these thinly veiled events inside an otherwise irreverent comedy. A show like “Spongebob Squarepants”is laughed off because it’s subversive: those political underpinnings are relegated for audience members old enough to understand. Zootopia isn’t interested in subversion. It very clearly draws a story to mirror present-day America with its suburban fears of “dangerous” urban neighborhoods, government corruption focused on helping minorities fail (harsh drug laws creating a stigma in society), and the drug trade itself targeting a specific portion of the population. The term biology is also used a lot in a way that projects the ignorance of societal prejudices. Disney isn’t fooling around and that ambition makes kids restless.

This wasn’t due to a discomfort with the content, though. The content merely overshadows the joke—or more accurately is the joke. Where those irreverent cartoons retain a sense of physical comedy with zany situations able to elicit giggles from children regardless of words spoken, Byron Howard and Rich Moore‘s film showcases the dialogue as crucial to the laugh. So while the cuteness (“Only bunnies are allowed to call other bunnies cute”) of Judy and the acerbic, dry wit of Nick (Goodwin and Bateman doing what they do best) can sustain interest for a good portion of the runtime alone, the plot’s slow descent into a noir detective story with impressively scary moments rather than light gags will lose younger viewers. It’ll also engage those slightly older.

So take the PG-rating to heart: there’s more going on here than meets the eye. Watching sloths work the DMV is hilarious to kids because of the labored facial expressions and goofy cadences, but more so to adults who’ve had to deal with the insane slog of bureaucratic nonsense. The feral “predators” reverting Zootopia’s utopic community of harmony into the jungle of yesteryear will frighten children with their menacing transformations and instill true empathetic terror for the bunnies caught in the way, but it will also make adults think. This is America’s broken system wherein the same politicians championing minorities to climb the social latter are constantly pushing them back down any chance they get. This is the American media instilling fear and harmful rhetoric without a second thought.

While I initially believed introducing such ideas of exclusivity between races only to work towards an endgame of inclusivity was harmful, I now wonder if it’s moot. Aging as a minority isn’t a state of mind as much as it’s a certainty depending on the color of your skin, so those ideas of exclusivity are already present. Kids already relate to Nick the fox—never trusted, never given the benefit of the doubt, and ultimately forced into becoming the stereotype they didn’t want to be because no one gave them respect. The same goes for the bunnies of the world. They are raised to be skeptical of anyone outside their gated communities, always judgmental with one finger on the foxspray in case there are any sudden movements.

If nothing else, the blatant satire will open the eyes of adults who feel as though the way they act isn’t implicit racism. Judy’s parents (Bonnie Hunt and Don Lake) aren’t racist towards foxes; they just want to protect their little girl. Well, it’s more complicated than that. This is why Judy makes such a big deal when she discovers her carrot-farming guardians partnered with the animal they fear most. This is the progress we hope can occur in the real world too. So Zootopia gives us something to chew while Judy and Nick scour the city for poor Mr. Otterton for the kids. Good people turn bad to show it can happen to anyone and bad become good to explain how it’s never too late.

Maybe we need more harsh reality in children’s films. This is also true to recondition parents. We’ve gone too long with innocuous fare all about the joke that we’ve become complacent to the point of sheltered. So when something like Zootopia arrives, refusing to hide its message, our knee-jerk reaction is uncertainty. Some kidswill get nightmares watching Mr. Manchas go “savage,” but surely we did too viewing The Jungle Book. Theymay cry when Nick Wilde advances on poor innocent Judy—a character they learned to trust now their enemy for reasons out of his control. But this is life. It’s an ever-fluctuating pool of selfish desire and outside interference. Peace is possible if taught. Zootopia does exactly that while also revealing the errors of our way.