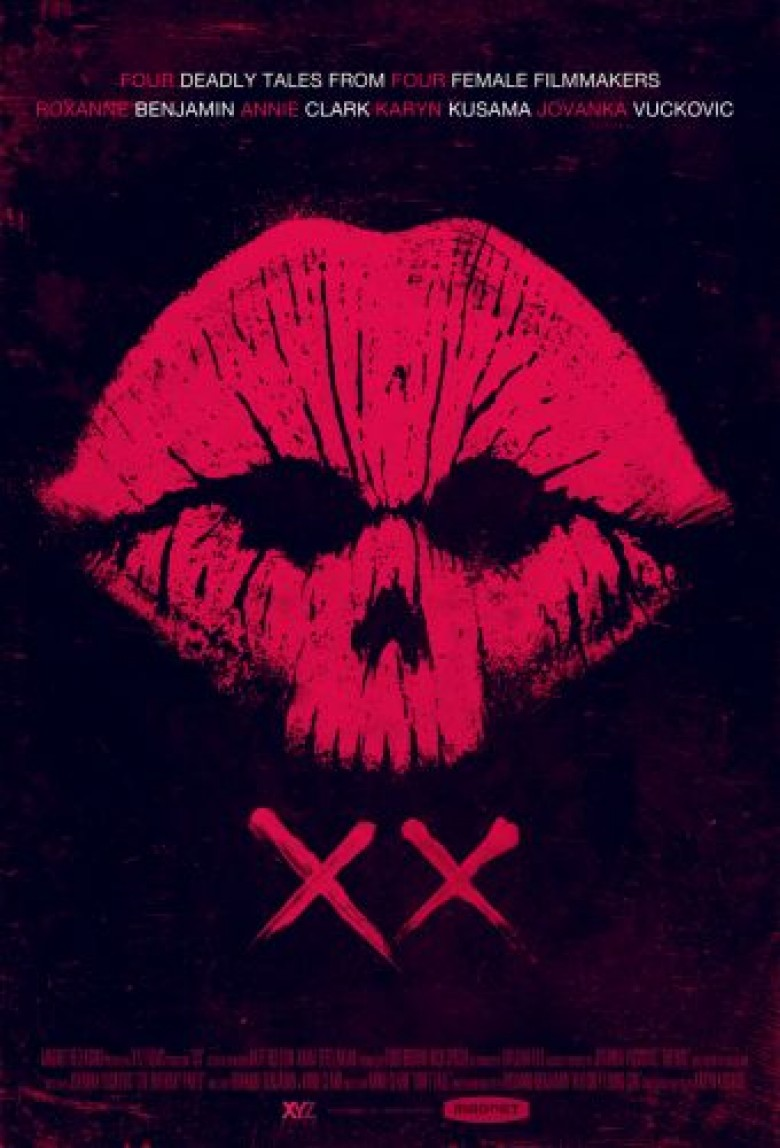 The concept is simple: task four female directors to create and film four unrelated shorts in the horror vein—with female-led casts—to be combined into a single compilation in which to show off the talents and voices of artists Hollywood continues to ignore. Tap newcomer Jovanka Vuckovic (whose “The Box” is based on a story by Jack Ketchum), musician Annie ‘St. Vincent’ Clark with her debut behind the camera (“The Birthday Party”), the veteran leadership of V/H/S producer and Southbound helmer Roxanne Benjamin (with “Don’t Fall”), and Cannes winner Karyn Kusama to tie things together as the anchor (with “Her Only Living Son”). Hire Sofìa Carrillo to provide creepy Brothers Quay-esque animated interstitials bridging everything together into a thematically cohesive whole and XX is complete.

It sounds simple and yet you can imagine how hard it must have been to put everything together in a male-dominated industry and genre. But with like-minded individuals, Magnet Pictures, and the allure of riding Kusama’s The Invitation success and St. Vincent’s transition to cinema, it’s happened nonetheless. We should all be glad too because even though it is far from perfect, it provides an alternative viewpoint to clichéd standards. Between “Don’t Fall” allowing the gullible, meek scaredy–cat to become the vicious monster attempting to rip people limb from limb and “Her Only Living Son” injecting humanity, choice, and maternal heroism to the usual misogynistic devil-spawn trope, there’s a lot to like. And don’t be surprised to find yourself partaking in some genuine, intentional laughter either.

Before I comment on the shorts, however, I must admit the most memorable and unique work comes from Carrillo. She sets the mood with her stop-motion dollhouse clicking along the floor of an abandoned house in search of dead creatures able to birth life. The eeriness of her aesthetic and in-close camerawork capturing details of texture and authenticity is mesmerizing and I hope we’ll soon be able to see the Guadalajara, Mexico native’s work in full (one short is available on her Vimeo channel right now). This doll’s journey is one that seeks its own specific destination while also inferring on the stories it accompanies. A feminine sense of creation, nurturing, and love gets subverted into a darkly sinister realm of nightmare—the stereotypically banal rendered excitingly mysterious.

It is also mystery that surrounds the first chapter “The Box”, a tale of despair and futility for a mother made to watch as her children and husband risk wasting away into nothing. The premise is tried and true, but still executed with precision on a crowded subway train around Christmas. Susan (Natalie Brown) is traveling with her young kids Jenny (Peyton Kennedy) and Danny (Peter DaCunha), their journey home fatefully placing them next to an unnamed gentleman with a red wrapped present (Michael Dyson). The boy’s curiosity gets the best of him and the man complies by showing what’s inside. What follows is a visceral reaction of fright and a hunger strike without explanation. Desperate to know what he saw, I couldn’t help letting frustration take hold.

It consumed me and took me out of the story as a result. I wanted something I couldn’t yet have and was made to sit through day after day of Susan not being worried while her husband’s (Jonathan Watton‘s Robert) hysterics increased. I think some unintentional humor actually did sneak in via the performances that even a gruesome dream sequence couldn’t quite salvage. The progression forward became somewhat trying, the open-ended conclusion earned even if it’s somewhat of a whimper with my biggest take away being a subway sign headline: “Shame may be fatal”. That one detail alone has me contemplating a rewatch, but I’m not yet sold. My indifference is a case of expectations not equaling what was received, so perhaps the blame lies solely with me.

“The Birthday Party” gets things moving a bit quicker with Clark’s infectiously surrealistic absurdity approaching “horror” without ever truly embracing it. There are shades of Twilight Zone: The Movie vignette “It’s a Good Life”, enough to get me invested despite it all proving much less sinister. Instead the piece is more black comedy of errors as Mary (Melanie Lynsky) desperately hopes to give her daughter (Sanai Victoria‘s Lucy) a memorable party. To do so, however, she must keep a secret hidden from an enigmatic nanny (Sheila Vand), annoyingly self-absorbed neighbor (Lindsay Burdge), and hired entertainer (Joe Swanberg). The put upon Mary’s efforts gradually ratchet the tension up until a brilliantly conceived punch line is delivered by a series of title cards that had me laughing out loud.

Benjamin’s “Don’t Fall” follows with a conceit we’ve seen countless times: four twenty-somethings (Breeda Wool‘s Gretchen, Angela Trimbur‘s Jess, Morgan Krantz‘s Jay, and Casey Adams‘ Paul) head into the desert for relaxation and find ancient iconography painted on stone before evil arrives to attack. It lays on self-aware tropes thickly, but delivers on them in a subtle yet important way. The highlight is definitely its creature effects; the brevity of the piece keeping things lean to provide a couple jump scares and a lot of blood. So if you were worried things would remain mostly psychological and not visceral, be assured that you will get your fill of gore with this one. Whether its lack of exposition or depth proves a plus or minus is up to you.

That leaves “Her Only Living Son”, the quartet’s most accomplished piece. It also stumbles a bit with tone like “The Box”, but that uneasiness does help instill uncertainty. Cora (Christina Kirk) has spent eighteen years on the run to shield her son Andy (Kyle Allen) from his father, but the time has arrived for him to choose his own path. Kusama injects a ton of visual clues towards this coming-of-age moment’s deeper meaning and a perfectly off-kilter cast of periphery players keep us off-balance until the end. And in a world where a law labeling pregnant women as “hosts” has been passed, seeing the strength, sacrifice, and unwavering love this mother has for her child is nothing short of necessary in a role usually relegated to “host” status.