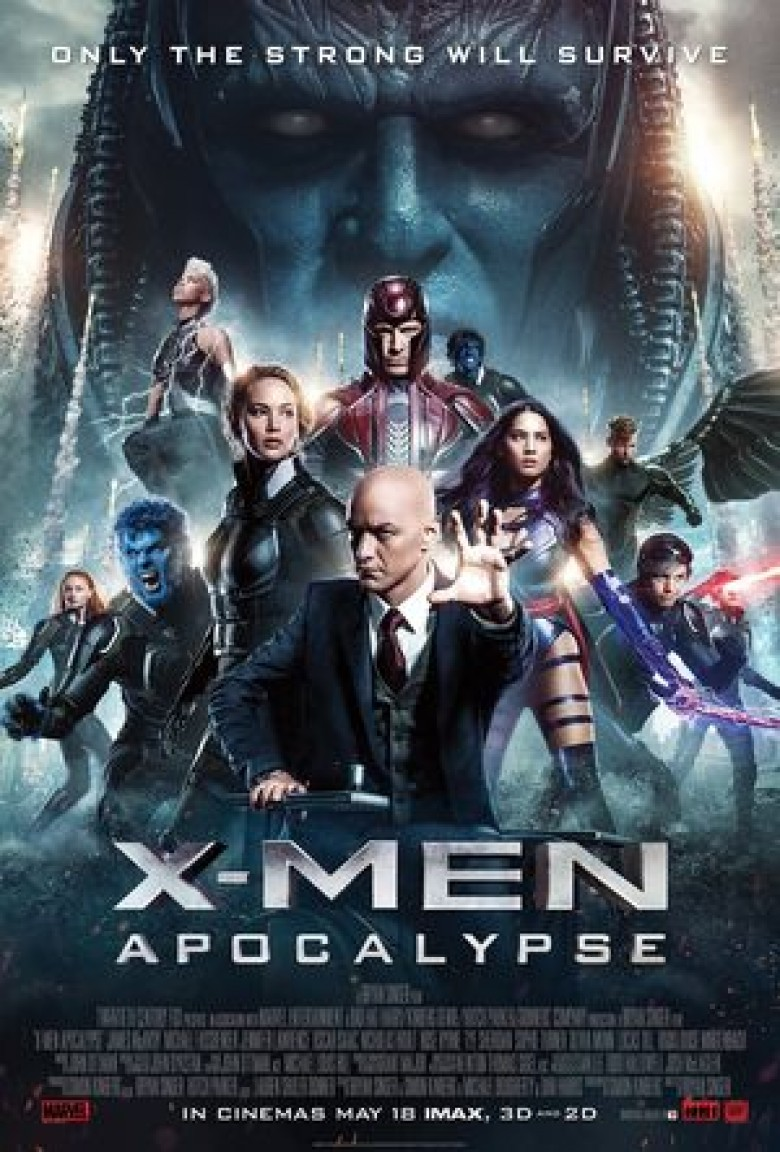 “And from the ashes of their world, we’ll build a better one”

At a certain point Charles Xavier (James McAvoy) understands his pupils need more than just help controlling their powers in the X-Men universe. They must also learn to fight. He and Erik Lehnsherr (Michael Fassbender) had no choice but to battle forces of evil in X-Men: First Class and in Days of Future Past the real war was fought in the future with a team of soldiers already formed decades after a thus far unseen origin. Professor X, Magneto, and Mystique (Jennifer Lawrence) have always done what’s necessary for survival so the next mutant generation wouldn’t, but it’s never that simple. Rather than immobilize to combat against human fear, it’s one of them—a mutant who has grown so powerful that he believes himself to be a God.

Absolute power corrupts absolutely and En Sabah Nur (Oscar Isaac) has ruled the world for centuries with exactly that. The first mutant in history with an ability to enhance those around him—strengthening an already present mutant power or activating a latent one—ruled Ancient Egypt with four disciples by his side, transferring his consciousness into a new super-charged body whenever his current vessel had grown too old. It’s the discovery of his latest host’s healing gifts that finally has those he oppresses take a stand. His enemies rise in order to entomb his monstrous ways for eternity, but they’re too late to stop the transference process. En Sabah Nur’s now indestructible body waits underground until the Sun’s light can reanimate him in the glorious year of 1983.

This is X-Men: Apocalypse: a return of evil just when everything appeared to be taking a turn for the better. The world had more or less accepted mutants after their bravery against Dr. Trask’s Sentinels and many had found their way to Xavier’s school to learn who they are and what they can do. Mystique became a mercenary of sorts, freeing mistreated mutants on her own terms without Charles or Erik’s voice guiding her. And Magneto took the helmet off to begin a fresh life abroad. He started a family, put his past behind him, and even found the capacity to become heroic on his own terms. Peace has never been permanent, though, and it doesn’t start now. Tragedy strikes, En Sabah Nur rises, and mass genocide commences.

I never read the comics so my knowledge of X-Men is entirely based on what I’ve seen at the movies. I’ve heard director Bryan Singer and screenwriter Simon Kinberg‘s latest foray with mutants is a far cry from the “Age of Apocalypse” arc they crib, but I don’t mind this reality because I have no affinity to the source material with which to compare or contrast. Where its place in the cinematic franchise is concerned, however, I feel it fits nicely as the culmination of the prequel/reboot trilogy the filmmakers set to deliver. Erik found a semblance of control in the first, Charles reclaimed his unwavering idealism in the second, and now they’re situated as autonomous halves of an all-powerful whole to set what’s next in motion.

My favorite part of this film is that Singer and company have embraced the fresh start Days of Future Past provides. They’re no longer working towards already existing canon—nothing is holding them back from having Professor X and Magneto’s bromance evolve into alliance or Mystique from staying with the former rather than the latter wreaking havoc on human inferiors. This go-round actually seems very intent on creating a partnership between mutants and humans by positioning CIA Agent Moira Mactaggert (Rose Byrne) as a liaison and ensuring the eminent threats arriving with enough conflict to warrant movies target everyone. En Sabah Nur’s Apocalypse as written here isn’t seeking a world solely for mutants. He’s expunging the weak. Surviving without powers means you’ve earned the right to acquire them.

It’s interesting that we don’t really see a human-based military trying to stop the chaos either. In fact, besides a return of Colonel Stryker (Josh Helman) to allow for an uncredited berserker cameo, non-mutants are pretty much shown as collateral damage or fearful politicians awaiting their extinction. They know they can’t do anything and for once they acknowledge mutants are on their side. So while Apocalypse and his “horsemen” (Magneto, Alexandra Shipp‘s Storm, Olivia Munn‘s Psylocke, and Ben Hardy‘s Angel) start destroying landmarks to rebuild his pyramid in Egypt, Xavier’s rag-tag bunch of devotees hope to find a solution. Mankind awaits its demise while a handful of mutants dig deep to discover their inner heroism. This is the birth of the X-Men as we know them to be.

The journey can be bloated, but there are so many characters that 144-minutes almost isn’t enough. Besides the gut-punch event horizon for Magneto, he has very little to do but cause mayhem and eventually cop-out. Jubilee (Lana Condor) is forgotten once the “heroes” leave and Psylocke is allowed one fight scene with a whip that makes you wonder why Munn trained so hard in stunt swordplay when Singer wasn’t going to use any of it. Storm gets a bit more to do arc-wise considering she’ll be playing a more prominent role in the future, but Angel is nothing more than muscle to toss around. The newcomers with meatier roles are Jean Grey (Sophie Turner), Cyclops (Tye Sheridan), and Nightcrawler (Kodi Smit-McPhee), a trio who quickly takes the spotlight.

Beast (Nicholas Hoult) and Mystique more-or-less pass the torch to them and Quicksilver (Evan Peters with another pop-song backed speed scape) as the Professor gets too caught up in Apocalypse’s plan to figure as more than plot device. The elder statesmen are in the fight, but Singer is pulling no punches where death or destruction is concerned. Each first generation X-Men character has the potential to die before the credits roll unless Jean Grey and her fellow students discover the strength to prevent it. Does this mean Apocalypse proves more setup for a new trilogy working its way towards a “Dark Phoenix” storyline than a self-contained chapter? Yes. En Sabah Nur is a bad ass and his abilities are cool to witness, but we know he must fall.

So the endgame is a change in method and principle. This is a character study introducing important blood we haven’t yet seen as well as a new doctrine to train as weapons of peace rather than hide in plain sight. Singer says he wanted to comment on God and religion, but so much of that is glossed over besides its giving En Sabah Nur a relevant if uninteresting backstory. His Apocalypse is a catalyst to drive a wedge through the mutant population between good and evil. He’s a pawn in his own movie—a figure to follow or defeat; a fallible mutant who’s never been challenged that’s able to bring out the true power of those he touches and those seeking the potency within to destroy him.

The film is the new trilogy’s weakest, but it’s no less necessary in the bigger picture. It’s the final piece towards becoming bona fide X-Men—protectors of life whether mutant or not. It also provides Singer an out as far as letting Lawrence, Hoult, and Fassbender take a back seat in the franchise to focus on Turner, Sheridan, Smit-Mcphee, and Peters who are all more interesting and alive than their predecessors anyway. Having a villain as indestructible as Apocalypse is tough to write without having another indestructible force to contend with him, so the goal here is revealing who that opposing entity is. With that is an expunction of naiveté and an understanding of this brave new world’s true stakes. This is the calm before an impending storm.