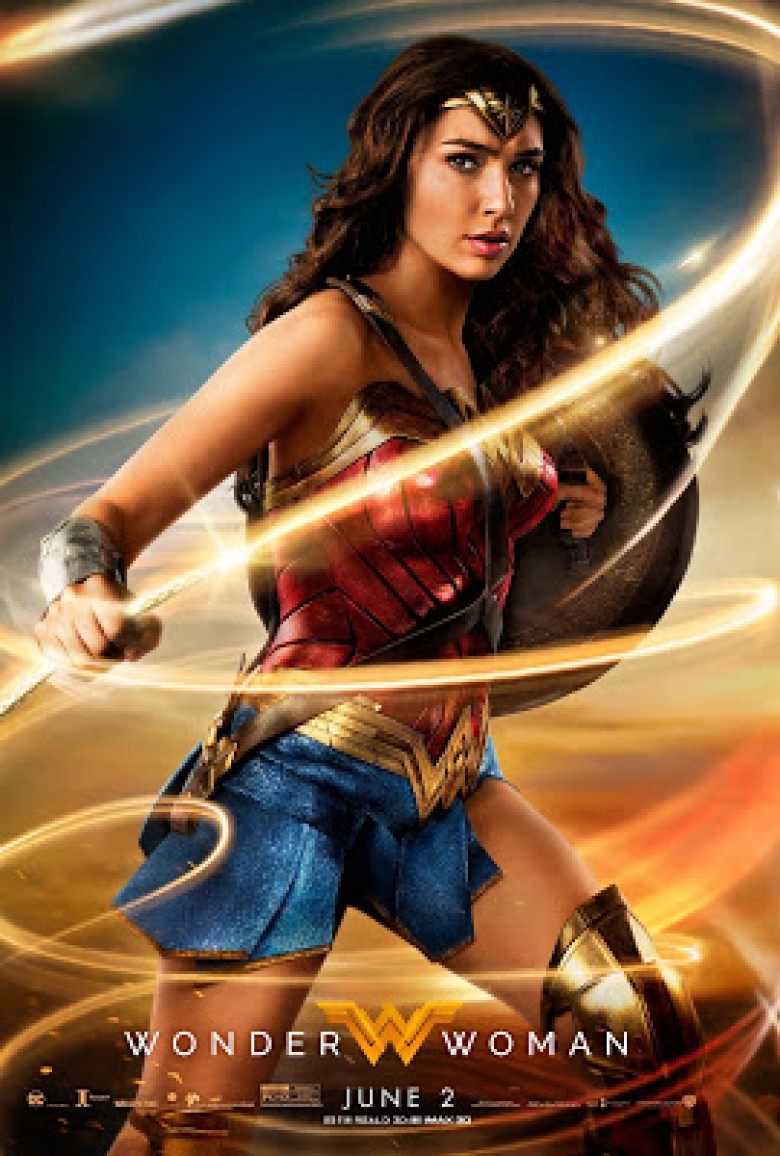 “They don’t deserve you”

October 1941. That’s the month William Moulton Marston‘s Wonder Woman debuted in All Star Comics #8. Yes, it’s taken seventy plus years to put her in movie theaters alongside contemporaries and equals Superman (created in 1938, onscreen in 1948 via serial) and Batman (created in 1939, onscreen in 1943 via serial). Finally women the world over who’ve been inspired by the superhero, (you know, how many believe only a red-blooded, action-crazed male ever could), can see her in today’s popular media while young girls are allowed a venue to experience all she has to offer as a “real” hero of immense stature outside comic books and animated features. Princess Diana of Themyscira—a fierce warrior who seeks diplomacy and peace through love before showing her might—has arrived.

It’s a long time coming and as such uniquely positioned to disappoint die-hard fans. As part of Zack Snyder‘s DC Extended Universe, it’s only natural that Allan Heinberg‘s script (from a story developed by he, Snyder, and Jason Fuchs) would use Diana’s “New 52” origin from 2011. Gone is the idea she’s molded from clay and brought to life by six Greek Gods—except partly as bedtime story. Instead we’re given a trajectory leaning heavier on the fight than many will hope, one where Zeus is her creator, Ares her mission, and all female Gods left unmentioned and invisible. These Amazonians exiled themselves to Themyscira for freedom from War with a capital “W”, preparing for the potential of his return with a special sword to fatefully slay him.

For better or worse, this is the Wonder Woman those starting out in Justice League lore—young or old—will know. It’s a reductive variation rendering her akin to Hercules while relying heavily on masculine tropes and impact despite an upbringing devoid of men. But it does ensure our understanding that her strength is equal to or stronger than her Kryptonian counterpart Kal-El. The simplification may subvert some the qualities that make Diana (Gal Gadot) unique with war now proving something she seeks, but it also aligns her to the current DCEU tone while retaining a sense of joyful wonder and pure compassion Superman and Batman ignore in favor of melodramatic martyrdom. So despite her motivations being darker (kill Ares), she is positioned to remain the League’s light.

Patty Jenkins‘ film does well to keep the concept of Ares obscure, allowing “him” to be both literal Great War mastermind (to Diana) and figurative construct explaining the unadulterated violence (to mankind). Diana’s mother Hippolyta (Connie Nielsen) told stories of Ares while her aunt Antiope (Robin Wright) added context and intent when training her for the prospect of his resurfacing. So when American spy Steve Trevor (Chris Pine) crash lands within the cloaked boundaries of Themyscira—Germans hot on his tail—Diana and the Amazonians believe it’s a sign Ares has come back. This notion drives her decision to leave with him, her peoples’ mission aligned with mankind’s search for survival. As we all know war to be, however, humanity doesn’t need a God’s help to destroy itself.

This places Diana and Steve on the side of righteousness with their opponents coming into focus as German General Ludendorff (Danny Huston) and his pet Dr. “Poison” Maru (Elena Anaya). The latter duo is rather one-dimensional, but with reason considering this origin tale is less about whom Diana fights and more about why. They have the means to ignore a British armistice led by Sir Patrick (David Thewlis) and cause worldwide genocide instead. This is the evil Diana must see with a black or white lens in order to let her morality and compassion lead her into danger and excel. They provide her an example of man’s greatest shortcomings while Trevor’s friends (Saïd Taghmaoui‘s Sameer, Ewen Bremner‘s Charlie, and Eugene Brave Rock‘s Chief) supply the hope for better.

Parallels to Captain America: The First Avenger abound and the DCEU was correct in going that route to right their fledgling ship post Batman v Superman and Suicide Squad‘s poor critical reception (but huge box office receipts). The comparisons between Diana Prince (as she is known to the human world) and Steve Rogers are many from strength, heart, intellect, and courage. They are my favorite kind of superhero because they act from an unflappable code of honor. All the handwringing in Man of Steel and BvS is absent because Diana has a mission to fulfill whether her human compatriots agree or not. There is no greater good, only good. She cannot watch one person die in order to save a thousand. She will save one thousand and one.

Wonder Woman is about providing Diana’s strength in a way that doesn’t conjure fear. Setting the tale during World War I helps because chaos reigns supreme and the good guys are willing to accept whatever help is available against bad guys developing gas that eats through masks and explodes. This is an era where heroes are needed to provide hope and where skepticism and mistrust don’t yet abound like they do post-Cold War (besides misogyny considering the British military’s brain trust is still able to completely derail at the sight of a woman in their war room). It’s refreshing to just watch as this icon exits the trenches to clear a path forward and save the day without the bureaucratic nonsense modern day comic movies inject for realism.

This is fantasy and therefore not without a desire for happiness now and again. Whether you allow yourself to look past the conventional plot arc, disregard for Diana’s true canonical heritage, and cartoonishly shallow villainy of the Germans or not, you must embrace Gal Gadot and her smile. Her pure delight in discovering the outside world’s perks (ice cream) and the authentic warmth of those she saves is infectious like no other comic book adaptation besides The First Avenger and Guardians of the Galaxy. There’s something to be said about the emotional swell an act of kindness can deliver without the myriad machinations of today both before and afterwards. Jenkins ensures we’re allowed to enjoy Diana’s heroics alongside her and devoid of muddied consequences out of her control.

There’s also a notion of including a sidekick to help its familiar origin tropes not feel so cumbersome. While there’s a bit of romantic spark between Diana and Steve, it’s born naturally without clouding their respective staunch motivations inside the fight. She has her path and he his with the two assisting each other indirectly as much as directly. We aren’t forced to experience a belabored conveyor belt from one baddie to the next since they’re fighting more than one simultaneously. Steve and his team go after one arm of evil while Diana takes on hers—their reasons their own under a wider umbrella of victory for freedom. This renders the climactic battle of superpowers less unwieldy by not simply being one long ten-minute sequence of disaster porn.

That doesn’t mean the result is any less exhausting, but it does provide room for an emotional release beyond vanquishing one’s foe. This is a prequel so many years in the past that survival isn’t necessary for all. Death looms large by sacrifice, altruism, and rage. We’re talking about war and its blind insanity. Wonder Woman’s presence doesn’t sanitize that reality; it merely gives the right side an advantage. It’s fun to watch her take out proto-Nazis with kick flips and fists, her lasso of truth assisting as her sword awaits Ares—if he proves real enough to use it on. The effects aren’t always the best during the action with computer stand-ins for stunts, but there are some cool speed cranks to constantly highlight athleticism beyond power.

So there’s action, humor, and a sense of awe setting the film apart from what we’ve seen thus far from the DCEU. It merges the best parts of Thor and Captain America into an origin story possessed with increased character complexities despite its generic plot. This is Diana’s introduction to humanity’s strengths and weakness so she can decide for herself whether or not we’re worthy of her abilities to save us. You have to remember that the entire world can be corrupted to the point of extinction and yet still earn salvation because one rogue entity has the belief things can turnaround. If a human has the mettle to do so against all odds, why shouldn’t a Demigod? These events prove to her that we aren’t yet lost.