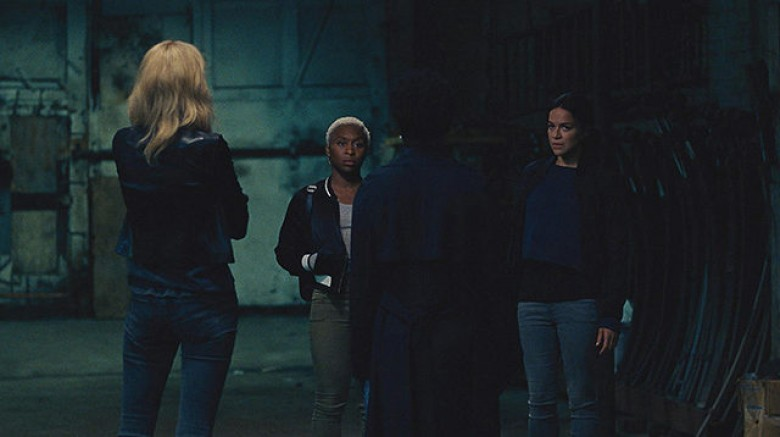 “This isn’t your world”

When the first trailer for Widows dropped, I thought, “Steve McQueen is branching out to genre fare now.” This wasn’t a slight, just an observation. I obviously wanted to see it, but thought I could wait before the notes out of TIFF declared it a must-see. Suddenly I needed to reevaluate my perception of what this thing was behind its marketing push. Would there be more than just revenge and heist-based thrills? Would this be a slower burn a la co-writer Gillian Flynn‘s novels augmented by McQueen’s politicization and humanistic approach to tough subject matter? To read about the source material (Lynda La Plante‘s BBC series from the 80s) is to assume it’d be pretty straightforward. Thankfully McQueen only used that template to make it all his own.

Beneath its basic premise of four criminals (Liam Neeson‘s Harry Rawlings, Jon Bernthal‘s Florek, Manuel Garcia-Rulfo‘s Carlos, and Coburn Goss‘ Jimmy) dying in a hail of police gunfire after a job gone wrong who leave their widows with plans for another robbery they can complete for financial security lie complex themes that branch out towards social, economical, cultural, and racial divides. There’s a backdrop of politics with 18th Ward Alderman Tom Mulligan (Robert Duvall) stepping down for health reasons to pit his silver spoon son Jack (Colin Farrell) against local gangster Jamal Manning (Brian Tyree Henry) in a special election. There’s the shock of poverty as these widows of very disparate backgrounds find themselves with nothing. And also the weapon that is desperation when survival instincts kick in.

Veronica Rawlings (Viola Davis) is forced into thinking like her late husband because the man he stole two million dollars from (that burnt up in the fire that claimed him and his partners) wants it back. It just so happens that this man is Manning. He may appear reasonable for his would-be constituents, but those in the know freeze at the sound of his last name because they’re aware of what he’s capable of doing on the streets alongside his more vicious brother Jatemme (Daniel Kaluuya). That money was for Jamal’s campaign—a bid to use his underhanded criminal background for auctioning off permits and construction deals rather than whatever it was he did before. He sees how Veronica lives and demands every penny in one month’s time.

As the other widows soon realize, however, Veronica doesn’t have anything. These men told them they would be taken care of and did what was necessary whether or not their wives knew the extent of what that entailed. In her mind she has no choice but to interpret Harry’s chicken scratch and lead a team of her own to steal what appears to be five million bucks. Veronica can payoff Manning and split the rest with whomever joins her crusade. The hope is that the women caught in her same predicament (Michelle Rodriguez‘s Linda, Elizabeth Debicki‘s Alice, and Carrie Coon‘s Amanda) will fill that bill. They’re single mothers and/or jobless with limited options as far as where to go from here. It’s time to reclaim their independence.

Despite what the trailers are selling, the heist itself is a minor piece of the whole. It’s what brings them together and ultimately what could provide them salvation, but they don’t simply come onboard and get going. Take Amanda out of the equation for now (her role is crucial, but in the shadows a bit longer than the rest) and look at the others. Alice is a trophy wife who traded her abusive mother (Jacki Weaver) in for a wife-beater of a husband. Linda is an entrepreneur who trusted her beau only to discover the profits she gave him to pay bills was being siphoned off to a bookie along with the lease to her store. And Belle (Cynthia Erivo) can barely make ends meet working two jobs.

These aren’t criminals. As a flashback later shows, Veronica didn’t even fully know what Harry did for a living until the death of their son. So this isn’t some job they’re doing because they’re bored or even because they can. They’re scared, way outside their element, and moving forward with nothing but sheer will. Completing this job is as much about making up for everything their husbands lost as it is reinforcing the fact that they aren’t the naïve pushovers the blindsided gut-punch those deaths provided made them out to be. This is about not being pushed to the background, pushed around, or forgotten ever again. It’s about realizing they can come together and do this thing out of necessity rather than desire. They can live for themselves.

That’s what Widows shows us before the heist’s moving pieces can even begin to materialize. It also reveals a community willing to stand-up to outsiders using them as a piggybank like the Mulligans have for years. Why does Manning have a chance to win against this legacy? Because Jack got greedy, people found out, and word travels fast. Why does Mulligan still have a lead? Because like those for whom this film is titled were used by their husbands, he uses the impoverished women of his district as pawns. He sits in a mansion mere blocks away from a derelict church Manning uses as campaign headquarters and pretends to care about anything more than his own aspirations to leave this nickel and dime government position for city hall.

Veronica and the others are thus fighting against the low regard their husbands held for them, demons they didn’t know preyed down upon them, and a rigged system of men as malevolent puppeteers (a metaphor extending to Lukas Haas‘ David too, the wealthy developer using money to try and control Alice while she in turn uses him instead). This journey is to more or less kill husbands who are already dead—murder the psychological hold keeping them down and the notion that they couldn’t survive alone. And their having to commit a crime to do this isn’t merely brushed away. After all, this part of Chicago is given only criminals to choose from as its leader. Those men stole from their community and they’re ostensibly stealing it back.

The film therefore excels in the details. I’ll guess that Flynn should be credited for the twists and turns provided these characters, but my assumption is that McQueen supplied a majority of their individual complexities. All we know about these women comes from their conversations and more importantly their expressive demeanors. There’s reason for Veronica’s steely façade and the tragic pain she holds beneath it. The same can be said for Linda’s tenacious resolve, Alice’s empowered rage, and Belle’s temperamental perseverance. This isn’t about them becoming criminals either. It’s not some origin story so two-dimensionally driven towards such a simplistic narrative goal. It’s instead about rebirth. They dip their feet into their husbands’ old way of living to ensure they will never have to rely on it again.

Davis is masterful in the lead role. Her severity throughout the film is hardly one-note and her very final moment onscreen with a smile that could light up the darkest of rooms should prove it to anyone who wants to believe that’s all it is. She’s working with devastating information that would break any of us in a similar position and yet she never falters from her mission. Rodriguez, Erivo, Farrell, and Kaluuya are solid supporting players in their own right, but I must give special mention to Debicki and Henry for really standing toe-to-toe against Davis’ commanding performance. They’re who make her blink and ultimately prove just as layered in their own unique ways. These are real people with everything to lose and even more to gain.