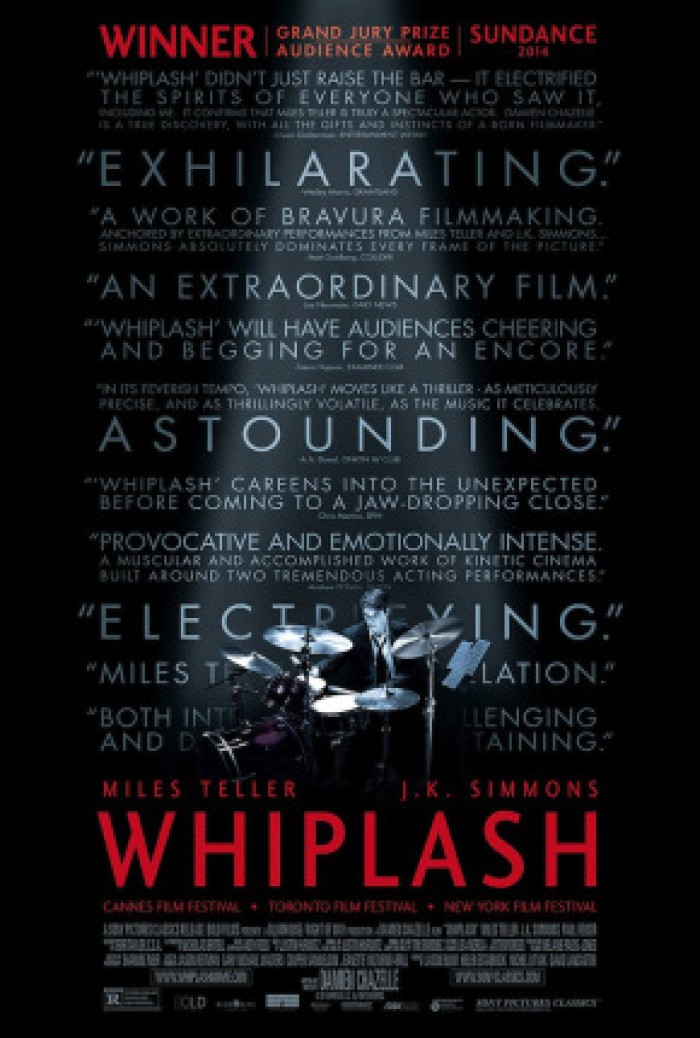 And here I naively thought the dinner sequence from The Riot Club would end up proving my favorite scene of the year despite the film itself leaving a lot to be desired. It just goes to show that you can never be sure until every prospective entry is counted because the final moments of Whiplash‘s tour de force assault on the senses by musical genius is honestly a transcendent piece of art in itself. From the performances by Miles Teller and J.K. Simmons changing mentality, focus, and ferociousness on a dime to the staccato cuts of a weeping cymbal, blood-soaked fingers pivoting sticks onto their drum, and unyielding faces of determination, you can’t help but find yourself smiling in dumbfounded awe halfway through straight on to its sharp cut to black and beyond.

Who does Damien Chazelle think he is storming into cinemas with such unbridled aggression? Yes he has another film under his belt, but good or bad his career officially starts right now. Here’s a guy with a Black List script in 2012 stuck without the financing needed to bring it to fruition. He partnered with some backers, pared down the screenplay into a eighteen-minute short, and watched as everything finally fell into place just one year later thanks in part to a feral supporting role from Simmons that carried on to its last iteration. By 2014 Whiplash was the Audience and Grand Jury winner at Sundance and officially tapped to be heard about during the upcoming awards season. That’s a heck of a hurdle-filled ride proving by its process’ two-year brevity it was great since day one.

A look into the life of a would-be jazz drummer prodigy at the prestigious Shaffer School, the film’s also a commentary on artist suffering. There’s a line by Simmons’ studio conductor Terrence Fletcher about how “good job” are the most harmful two words in the English language. It’s a hyperbolic statement, but one with relevance in today’s politically correct world seeking to homogenize everyone into standards skewing towards the lowest common denominator. As any artist knows, to be the best means struggling for years to put the tools together and earn the chance to be seen. This is why their lives are lonely, difficult, and depressive as well as why so many greats left this world too soon. Does that mean I condone the actions of an abusive teacher as portrayed onscreen? No. Well, maybe a little.

It helps to know that Chazelle himself sought drumming professionally during school and along that path met a man as terrifyingly direct and unapologetically perfecting as Fletcher. He knew eventually that he didn’t have the talent to continue—a good thing if Whiplash is any indication on what we can expect from his film career. But what about those who don’t? What about a first-year student like Andrew Neyman (Teller) who wants to be the next Buddy Rich or Charlie Parker, a kid willing to take the abuse because it only drives him harder towards that goal? This is the stuff of nightmares for parents; the depiction of an impressionable youth they don’t feel is ready mentally to know when enough is enough. And honestly, for every Rich and Parker there are thousands of others who fail.

Which party does Neyman fall into? Well that’s up to him and Fletcher. While we want to believe it’s Andrew’s decision alone, we know the truth is more complex. A guy like Fletcher is keenly positioned to provide a make it or break it voice of approval, one our drummer seems to have earned overnight. But as the praise conjures a sense of appreciation for the boy—a smile declaring, “I finally made it”—the anger brewing inside his renowned teacher peeks out to spark a fire not yet apparent. The scary realization is that it works. Andrew retreats from his relationship with Nicole (Melissa Benoist), forgets societal rules about playing nice with family at dinner in a gloriously profound dissection of the public’s opinion on the arts, and willingly mutilates himself through practice. But he gets better.

This is the conundrum—do the ends justify the means? For everyone who succeeds, you bet they do. For those who fail the answer is less clean-cut. And in that emotional state of seeing that you may not have ever been great enough to make it you begin to look for excuses why. Priorities shift, allegiances break, and an eye for an eye mentality crops up either from personal desire or that of an outsider trying to feel vindicated. The world we live in today sadly isn’t the same one of three decades, two decades, or even one decade ago. Consequences come to those with much less dire transgressions on their jackets because the voice of the parents unaware of what’s actually happening has grown louder. Disciples have therefore become weaker and their tutors haven’t yet softened accordingly.

I’m not quite sure I was prepared for where Whiplash goes or possessed by an idea of where it might. To me the trailer showed the menace of Simmons and the futility of Teller doing whatever it took to satisfy him. Andrew would either reach his goal or not and Fletcher would be by his side with a hug or contentedly frowning as he approached the next green musician hoping to be ignited. Chazelle gives exactly this, but on a trajectory that delves into the reality of their world as it’s overseen by a litigious society. He doesn’t create a music scene vacuum with its own rules and regulations because he knows that’s not how it works. Andrew and Fletcher must abide by the way of life outside those walls whether they agree with it or not.

In this way Chazelle showcases every possible high and low. He allows Simmons to explode in rage yet earn our respect while Teller cries in defeat and soars in confidence when germane to his teacher’s plans. Andrew’s a puppet: tugged and pulled this way and that until reaching inside himself to wrestle back control. It’s a courageous fight that put me on the edge of my seat despite its battles waging in the percussion section with wooden sticks and words as weapons. You have no clue what Simmons might do next because he doesn’t believe in “too far”. He yearns to create a Charlie Parker and Teller dreams to be one. They use each other, deceive each other, and find themselves on the same stage one last time. What follows is an unforgettably exhilarating display of cinematic boldness.