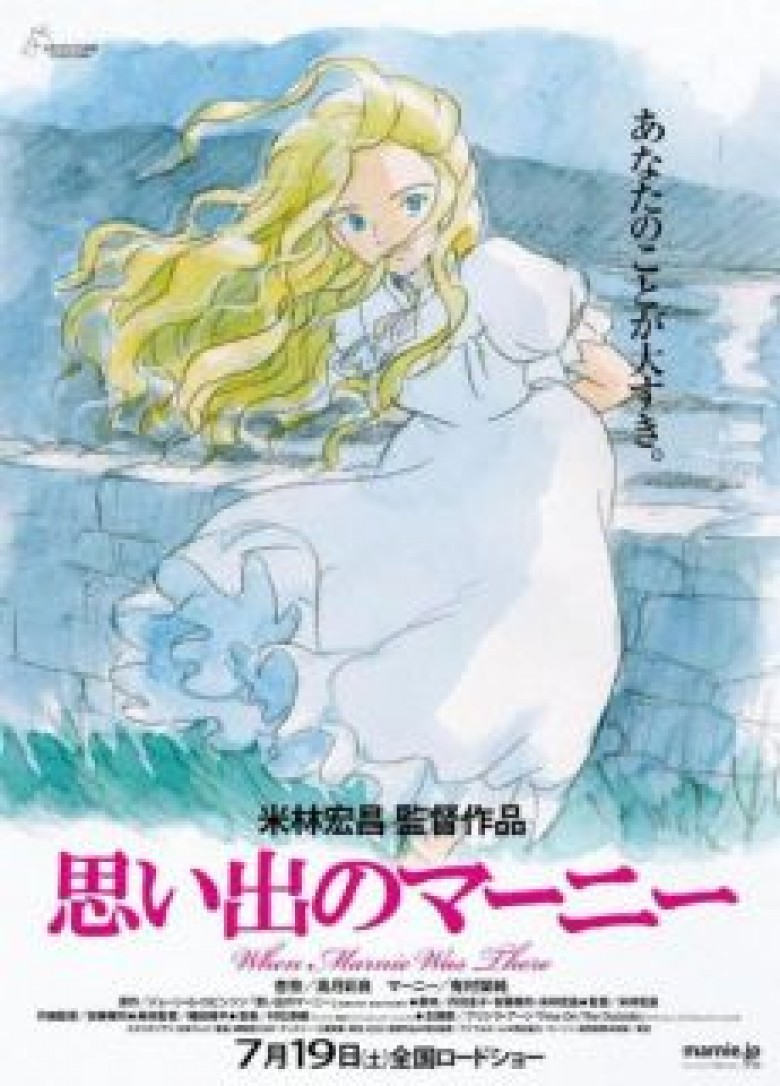 “I wish for a normal life everyday”

If Studio Ghibli ends up closing shop as announced, we can be glad their final film is a winner with the heart and soul we’ve come to love from Hayao Miyazakiand the team. I’m surely in the minority, but I’d even say Hiromasa Yonebayaski‘sWhen Marnie Was There is better than last year’s Oscar nominee The Tale of the Princess Kaguya. While bringing the aesthetic back to the studio’s customary style a la Spirited Away does remove some of the awe Isao Takahata‘s gorgeous drawings inspired, Ghibli’s “normal” look is still better than most others regardless. What sets it above is the resonance of its story—an admitted side effect of my Western upbringing. I simply find an adaptation of Joan G. Robinson‘s Carnegie Medal-shortlisted novel more relatable than a 10th century Japanese folktale.

That being said, it’s not as though my Ghibli tastes are status quo. Give me a choice and I’d pick Princess Mononoke or Howl’s Moving Castle over Spirited Away every day. I just took to young Anna Sasaki (Sara Takatsuki) here right from the start. There she was sitting alone on a park bench drawing during school, philosophizing about the world being a giant circle where everyone playing exists inside and she out. Anna’s introversion is seen as a shortcoming not only to teachers and louder classmates, but also to herself. Being a foster child who purposefully calls her guardian Auntie (Nanako Matsushima) rather than Mom and harbors consciously unjustifiable hate for the family that left her behind doesn’t help matters, but neither does pretending everything’s okay. Sometimes the only medicine is a change of scenery.

As a fellow introvert, I found Anna’s actions upon arriving at Auntie’s sister’s home perfectly developed. Impeccably well mannered for the Oiwas (Susumu Terajima‘s Kiyomasa and Toshie Negishi‘s Setsu), she pushes down any inclination to run from social situations if doing so will make them happy. It’s not like the Oiwas are strict either—they’d let Anna stay out all night doing whatever she wished because she’s so polite and responsible. So if she told Setsu she didn’t want to meet any neighborhood girls, the conversation would have ended instantly. But Anna tries for her sake, eventually botches the experience irrevocably, and ultimately learns by the lack of reprimand that the Oiwas care about her well being above any others. If she aspires to be alone to roam around the old Marsh Mansion all summer, so be it.

That’s exactly what she does too. Returning daily as if drawn by some otherworldly connection she’s unaware exists. So when a rowboat appears on the shore and Anna hops in to ride the high tide to the house’s stone dock, it’s not surprising she’d find a friend amidst the otherwise rundown and deserted property magically rekindled. A blond haired girl, Marnie (Kasumi Arimura) speaks about wanting to discover everything she can about her visitor. And sure enough they become best friends—two peas in a pod with similarly tragic pasts and current struggles. Anna for the first time sees someone else who understands being abandoned, being different (she too has blue eyes), and what it means to attempt pretending things are fine outwardly when they’re far from it inside. As alluded, however, their meeting is hardly by chance.

But this isn’t meant as a shock. In fact, I wouldn’t believe you if you said you didn’t know the truth of their dream-like encounters straight away. Much like my favorite M. Night Shyamalan film The Village, just because a reveal exists doesn’t mean the whole movie hinges upon it. Why Marnie appears to Anna despite the latter knowing the mansion is being renovated for a new family with a potential friend in Sayaka (Hana Sugisaki) is a mystery to be solved, not a manipulative secret. Knowing whom Marnie is before or after doesn’t diminish the reality that Anna needs someone to help see the world as more than a dark depressive cloud of loneliness. The young girl supplies exactly that while also forcing Anna along the path of kindly strangers Hisako (Hitomi Kuroki) and Toichi (Ken Yasuda).

It’s through their myriad interactions that we learn the root of Anna’s troubles. And rather than get laughed at by city folk at home, the Oiwas’ neighbors scoop her up and quietly take her back upon finding her unconscious in the street after each informative adventure with Marnie. The truth underneath is a tearjerker in its tragic origins, presently painful assumptions of mistrust, and heart-warming aftermath to come. Forcing Anna to run the gamut of the good and bad friendships bring strengthens its themes of love and understanding. Because just as effortless as it is to find someone you feel safe with, it takes but one misstep to topple it to the ground. Even then, however, whether the bond was airtight (Marnie), cautiously optimistic (Sayaka), or dead before it began (Nobuko), there’s always room for second chances.

This message and the more blatant look at foster children’s struggles from being fully aware the people caring for them aren’t blood relatives is wonderfully fleshed out for audiences of all ages. Adults get the complex emotionality of loss and love while children can simultaneously enjoy the gleeful spirit of happiness making ailments disappear and validate their own hardships by knowing they aren’t the only kid who’s sad, frustrated, or afraid. Fears are conquered, forgiveness shared, and hopes exclaimed safely with friends. Many of our problems stem from those closest to us so having someone else to trust and talk through such issues without risk of making things worse is necessary for sanity no matter who you are. Family is an infinitely broader term than its biological definition and is always there when you need it most.